A lovely sunny morning after a really good night’s sleep.

I gave the boat a good clean through – more than I would usually do but then we have a boatful of visitors this weekend.

Today it was the turn of my two favourite daughters – well one is a daughter-in-law.  Muffin went berserk when he saw Victoria – he loves her so much :-)  We didn’t hang around as we wanted to go and take a trip on the hop on hop off sightseeing bus.  We walked up to the station and caught the bus which had a chap giving a live commentary.  I felt really sorry for him as we got stuck in a traffic jam but he didn’t shut up once!  His knowledge of the colleges and who had been to them was excellent – though I can’t remember any of them now except that David Cameron went to Brasenose and studied PPE (Philosophy, Politics and Economics) – goodness knows why he was the only one I can remember!
Tradition has it that Brasenose College takes its unusual name from its original 13th century door knocker (now in the college dining room), shaped like a snout, or nose. The knocker was made of brass, hence "Brazen Nose" or "Brasenose".  There are gargoyles all over Oxford but the ones on Brasenose are wonderful. 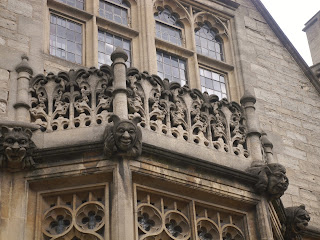 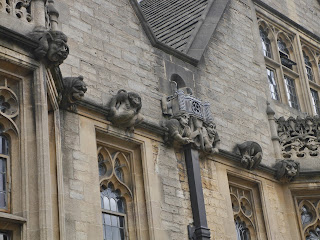 The University of Oxford has 38 Colleges and 6 Permanent Private Halls (PPHs) of religious foundation. Colleges and PPHs are autonomous self-governing corporations within the university, and all teaching staff and students studying for a degree at the university must belong to one of the colleges or PPHs.  A typical college consists of a hall for dining, a chapel, a library, a college bar, senior, middle (postgraduate) and junior common rooms, rooms for 200–400 undergraduates as well as lodgings for the head of the college and other dons. College buildings range from the medieval to modern buildings, but most are made up of interlinked quadrangles (courtyards), with a lodge controlling entry from the outside. 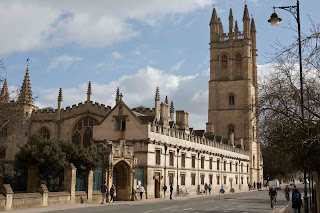 Magdalen College has to be my favourite.  It was founded in 1458 by William of Waynflete, Bishop of Winchester. The founder's statutes included provision for a choral foundation of men and boys (a tradition that has continued to the present day) and made reference to the pronunciation of the name of the College in English (it is pronounced “mawdlin”).  The college has large grounds, close to the city centre with a large herd of fallow deer in the large meadow.  The large, square Magdalen Tower is an Oxford landmark, and it is a tradition, dating to the days of Henry VII, that the college choir sings from the top of it at 6 a.m. on May Morning.

We passed so many colleges but certainly not all 38 of them!  We got off the bus in Broad Street and found a baguette shop which had a large garden at the rear where we were able to eat our lovely baguettes.  From there we went into Fudge Kitchen where we saw the fudge being made and were able to sample whatever we liked – I have to admit to feeling a little sick as I walked out!!  However it worked as we all bought some.
We got back on the bus but this time our commentary wasn’t nearly as good and we didn’t learn that much.  We were soon back at the station and walking back to the boat.

We sat outside for a while before Victoria very kindly painted my toenails for me!  The girls had used the Park and Ride as the bus stops on Osney Bridge and it was the easiest way to do it.  I went back with them to the car park and then we all went to Aldi before Laura drove me back to the boat.

I ordered a Chinese take-away via Just Eat.  I had used the address of the house we are moored outside and then a note saying we were on a boat opposite the house.  Fortunately Richard saw the delivery driver and managed to intercept him before he knocked on the door of number 11!  I don’t why I bothered writing a note!!
Posted by Linda Gifford-Hull at 11:04