Another lovely day and more visitors.

We knew that Ray and Diane were heading down this way and there was a knock on the window as we were having breakfast – they had arrived!  We had planned on breasting up but in fact there was a space so they moored in there.  They came onboard for a coffee before going back to Ferndale to get ready for their visitors.  Diane had made me two lovely pink hand towels which she had added crochet work to – they look lovely, thank you Diane xx 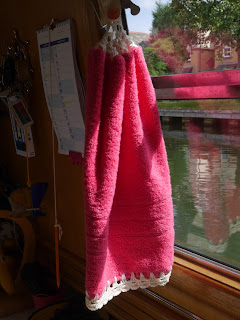 Today James, Richard’s son and Sam came to visit us.  Sam brought her little dog Scruffy who is only 10 months.  The plan was to go up to Godstow, moor up and visit The Trout for lunch.  It was a lovely trip up the river but all Scruffy wanted to do was play with Muffin and, as that wasn’t possible, he kicked up rather a stink!  We knew that The Trout would be busy and were told that we would have to wait about 40 minutes but in fact our buzzer went off after about 20 minutes.  We sat in the sunshine beside the river and had a very mediocre lunch at rather high prices.  However the service was excellent and the view was lovely.

The Trout was originally a hospice for the nearby Godstow Nunnery, and is believed to date from 1138.  It’s a Grade II Listed Building, being principally a 17th-century construction, with some 18th-century alterations and additions – the wooden bridge is also Grade II Listed. 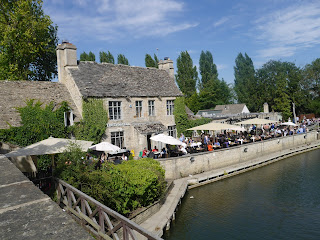 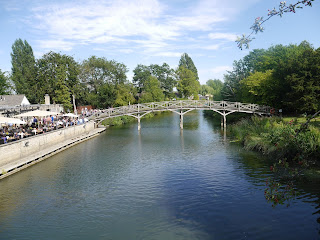 We walked back to the boat and let the dogs have a game.  Muffin usually outruns other dogs but Scruffy was hot on his heels and in the photo you can see the whites of Muffin’s eyes as he realised he wasn’t going to be able to outrun Scruffy! 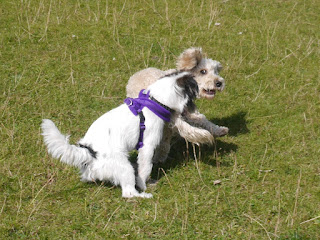 We came passed Port Meadow which is an ancient area of grazing land, still used for horses and cattle, and has never been ploughed - at least for around 4,000 years. In return for helping to defend the kingdom against the marauding Danes, the Freemen of Oxford were given the 300 acres of pasture by Alfred the Great who founded the city in the 10th century. The Freemen's collective right to graze their animals free of charge is recorded in the Domesday Book of 1086 and has been exercised ever since. 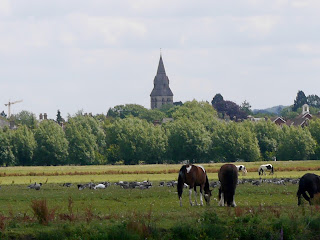 Scruffy was a lot quieter on the way back down the river – he had obviously burnt off some energy at Godstow!  We had a welcome cuppa on the bank back at East Street moorings before James and Sam left us.