Our journey today was a “will we or won’t we” one!!

We left our pretty mooring and up to Kidlington Green Lock where I found a single handed lady (and I don’t mean a lady with one hand!) in the lock.  I saw her through and got it ready for Richard.  I really had forgotten how quickly these narrow locks work – great!  We went on to Roundham Lock where the single hander was just going in so, again, I helped her through.  I’m not sure how she was going to get off the boat to do the lock as it is 7 foot 5 inches deep and she says she can’t get up on her roof anymore!

As we left Kidlington there is a sharp left hand bend under a bridge carrying the A4260.  A hire boat was coming through in the middle of the canal and as soon as he saw us he put the boat into reverse but that meant he had no steering so he just kept on coming until he hit us – I guess that’s one way of stopping your boat!

At the first of the Thrupp moorings we found two boats aground.  We had already noticed that the water level seemed low and these two boats had grounded during the night.  We towed one off and were just about to tow the other one off when he managed to free himself.

So now it was “will we or won’t we”!  What?  Get into Thrupp!!  As we turned the corner we saw one space which looked Mary H sized – it was!  We are the first boat on the 48 hour moorings.  We won’t understand why there are more 7 day moorings than 48 hour ones.  Thrupp is a honeypot and surely it would be better if the moorings freed up quicker. 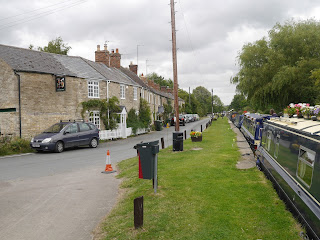 When we had the Sainsburys delivery last week I bought all the things I need to make Sue’s bread.  So today was the big day.  It was mixed and kneaded and then left to prove for 2 hours in our calorifier cupboard which is nice and warm.  Once it had doubled in size it was kneaded again and put into its tin for a further 40 minutes.  From there it went into the oven for 45minutes and then I got this!!!!  I’m thrilled though it is a bit wonky and we haven’t tried it yet! 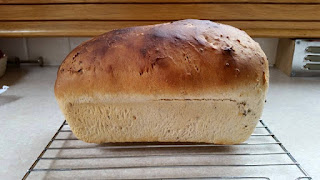 Ray and Diane arrived in the afternoon and we all went to The Boat for a meal.  The food was good and we had a good evening which was made even better by at last meeting the infamous Maffi!  Maffi writes a blog and is known for his straightforward way of putting things!  His boat is called the Millie M and, on more than one occasion, people have thought that we were Maffi as our blog is called “And Millie Makes Three” and the boat is Mary H.  It was really nice to meet him.