What a difference a day makes – we woke up this morning to lovely sunshine and blue sky, in fact I had to shut the front blind as the sun was dazzling me while I lying in bed drinking my tea. 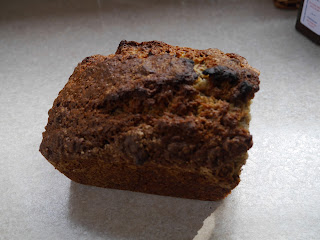 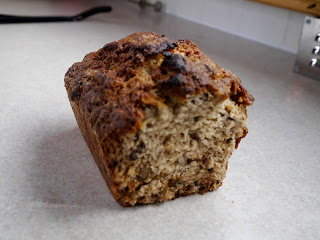 I must tell you about the banana loaf.  I often have brown bananas which I won’t eat as I don’t like the taste.  For as  long as I can remember I’ve saved them for my mother and they are always known in our house as “Granny bananas”.  Since my mother is no longer with us I have been throwing the brown bananas away but Diane offered me a piece of her banana bread one day and it was lovely.  It is a very simple recipe and is made with four brown bananas – sorted!!  I think I might have over cooked mine but it is lovely and crispy round the edge.  Oh I put walnuts in too.

We passed the place where someone has dug a hole in a field, breached the canal, filled the hole with water, taken his narrowboat in, mended the breach and now lives on his boat.  This photo is on everyone’s blog and we are all wondering what on earth C&RT are going to do about it. 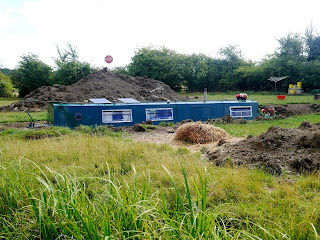 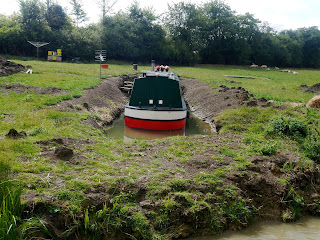 We found Ferndale at the top lock filling with water.  They have a tank that holds 200 gallons which takes an age to fill and also waiting was a boat with a tank that has a capacity of 230 gallons – needless to say we didn’t wait!
I love Napton Top Lock – I don’t know why really but it is on a right angled bend and I love steering the boat in.
It took us an hour and fifty minutes to do the nine locks of the Napton flight.  We seemed to meet a boat at most of the locks.  Some I had to pull over and moor for and some where I could just pootle until the other boat came out.  I think only one lock was empty.  It wasn’t as busy as I thought it would be.  There was a VL at the bottom lock and he said that he had seen 27 boats through the lock which for a Saturday in August I thought was quite low.  I have heard of two or three hour queues at the bottom before.
We pulled over for water after the bottom lock which took an hour to fill.  We haven’t filled since Banbury on Tuesday so the tank must have been pretty low.

I made a cock up with the mooring.  We found a spot and Richard pulled in but I walked on and found a better one so called him up.  Then I realised that it was empty because it’s a winding hole.  It is a huge winding hole however we are moored where we shouldn’t be!  A 70 foot boat has just turned with no problem so I think C&RT are just being generous. 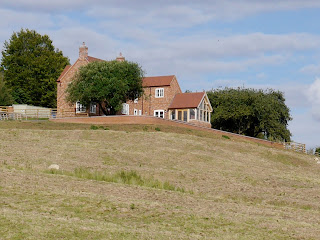 As we were mooring up Muffin hurtled up the tow path – like a dog on a mission.  I tried to call him but he wasn’t listening.  Eventually he came back followed by Sue from FL!  I didn’t know they were up there but Muffin must have done.

We walked up to the Folly shop to get bread but I came out with homemade marmalade and Magnums! 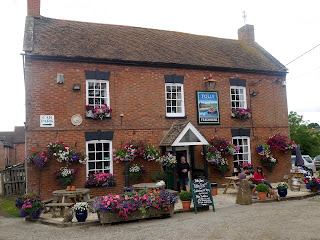 We had arranged for a farewell dinner at The Folly this evening.  FL is going into Wigrams Marina tomorrow as they are going to a wedding.  Ferndale is hanging around before going into Wigrams on Thursday – also to go to a wedding.  We will probably see Ray and Diane again but it’s the end of “Thames Totty” – the name we gave ourselves for our Viber group.  We had a lovely dinner though I couldn’t eat all my steak even though it was so tender – I took it home for Muffin’s breakfast.  We laughed a lot and had a really good evening.  There were some interesting hats hanging on a hat stand by our table – well I think the photos say it all!! 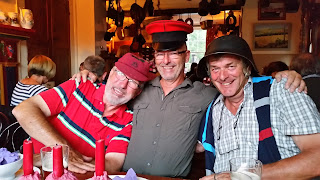 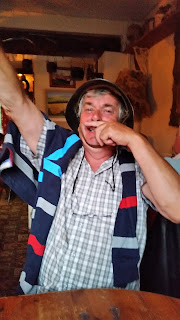 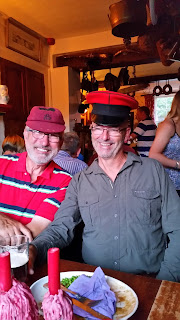 There was also an interesting cruet set on the table! 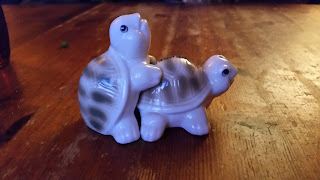