Bit more cloudy today but still nice and warm.  I’m still wearing my crop trousers though the jeans did come out when it was raining.

We moved up under the lift bridge and filled with water.  While we were waiting a “mini Dutch barge” came up the lock.  It was a strange looking thing and the skipper steered with a wheel.  The wife lifted the bridge and then the bow thruster started!  I don’t think I have ever heard a bow thruster used so much before – it was every couple of seconds and he STILL hit the sides as he went under the bridge!
We stopped at Bridge 166 and went to Morrisons.  I really like the Oxford Canal but shops are few and far between.  I managed to stuff the fridge and freezer to bursting point – don’t worry the freezer door is shut!  I have suggested the Richard that we get a 12v cool box which we can use in emergencies such as when I have done a good shop, it can also then be used on car journeys.  However I put a question on Facebook and I think I have changed my mind!  However I think we might change our fridge for a larder one now we have a freezer – Richard thinks that a new one might be more efficient and use less power.  What we have noticed is that since changing the cooker for a hob and oven our gas bottles are lasting so much longer.  We haven’t had to change the present one at all since we’ve been cruising.

As we approached Twyford Wharf we came across a hire boat coming towards us backwards.  I was really impressed with how straight he had the boat.  As we approached I realised that he was a Twyford Wharf worker and was trying to get the boat in a position to wind – he obviously does it on a regular basis still pretty impressive! 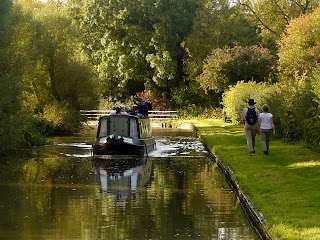 It was such a lovely day that we decided to have a short day.  We pulled over before King’s Sutton Lock and that was us for the day.  I sat and caught up with blogs until my iPad ran out of power so had to make do with a proper book – it’s the first one I’ve read for ages.
We had the lovely view of Church of St. Peter and St. Paul at King’s Sutton.  Apparently in 1775 a fire broke out which, owing to the dryness of the weather, spread so rapidly that the greatest part of the Town is burnt down.  Fire engines were called in from Banbury, Adderbury and Aynho, but to no effect. The fire spread fast and in about three hours 40 houses were burnt down. This was not ‘the whole town’ but, since the total number of houses in Kings Sutton may have only been in the region of 150 it was a major part.
Thankfully it would seem that the Church was saved from the fire.  The story of St. Rumbold suggests that the Christian faith was established here in the mid-7th century.  The place name means the King's south estate. King Alfred mentions it in his will.  He died in 899 and the church that was on the site before the Norman Conquest was a minster church serving as a missionary centre for the surrounding area.