A lovely morning but as we had the sunset last night we didn’t get the sunrise this morning. Once again all the locks were against us today but we aren’t in any hurry so it doesn’t matter.  I walked from Elkington’s Lock to Cropredy a distance of about 1½ miles, stopping for the locks of course!  We’ve noticed how quiet the canal has been since Fenny Compton and the moorings at Cropredy were completely empty – I’ve never seen that before.
We were following a hire boat who were obviously in less of a hurry than us so we pulled over for lunch to give them time to get ahead however they pulled out in front of us just before Banbury but as we were on tick-over passed moored boats it didn’t matter.
As we rounded the corner at Banbury we were really surprised to see only three boats moored up at Castle Quay – where is everyone??  Of course it was like trying to park in a car park where there are so many spaces that you don’t know which one to park in!

We wandered into town as I needed to buy a wireless mouse – I had forgotten mine and Richard was getting a bit fed up with me always using his.  It was then into M & S to get fruit as I always thinks theirs is best.

Ride a cock-horse to Banbury Cross,
To see a fine lady upon a white horse;
Rings on her fingers and bells on her toes,
And she shall have music wherever she goes.

I thought I would try to find out about the nursery rhyme.  There are so many interpretations but most people agree that the Cross that currently stands in the centre of Banbury has nothing to do with the rhyme. The cross now standing was erected in 1859 to commemorate the marriage of Queen Victoria's eldest daughter. Banbury had at least three other crosses: the High Cross, the Bread Cross, and the white Cross. It is also possible that 'Banbury Cross' refers not so much to a monument as to the location of crossroads. Banbury was built at the junction of two ancient roads the Salt Way, still used as a bridle path and Banbury Lane, part of the Jurassic Way which ran from the Humber to the Avon.

But who was the fine lady?  Local tradition suggests that the fine lady was a member of the Fiennes family, the local aristocratic ancestors of Lord Saye and Sele who own nearby Broughton Castle OR it could have been Queen Elizabeth I OR maybe even Lady Godiva.

A cock horse? It can mean a high-spirited horse or a stallion.

The nursery rhyme was first seen in print in the year 1784, although it was known in its current form in at least 1760. 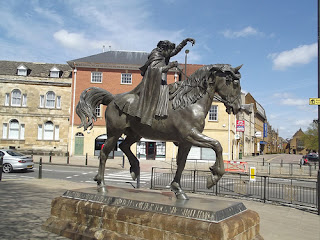 Whatever the real meaning of the rhyme Banbury is obviously very proud of it as in April 2005 Princess Anne unveiled a large bronze statue depicting the Fyne Lady upon a White Horse of the nursery rhyme.