I wonder how long these lovely mornings can last.  We have 10 days or so left on the boat so I’m keeping my fingers crossed they can hold out that long.

Having said on Friday how quiet the canal was – it was a one day wonder!  Since then it has been busy and today there were queues at the locks – still it means you get to chat to some interesting people.  One woman told me that they had met a man whose 2 year old daughter had fallen in a lock.  It appears that they had been on the boat for three months and the crew consisted of Dad, Mum (7½ months pregnant), 3 year old, 2 year old and a dog.  Dad had to dive in to save the little girl.  I know I don’t know the whole story but what on earth was a 2 year old doing on a lockside?  I only hope she had a lifejacket on. 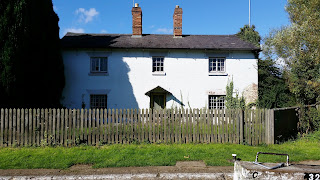 At Nell Bridge Lock there is a cottage and I just can’t decide whether anyone lives in it or not!  It looks derelict but there is the odd sign of life.

I walked from Nell Bridge to Aynho Wharf – a distance of 1.3 miles.  The gates on Aynho Weir Lock are real whatsits – I don’t know why the balance beams have to be angled. 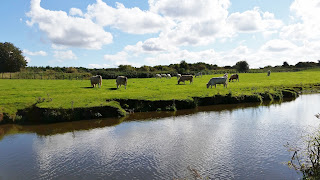 We moored up at Aynho Wharf in exactly the same place as we did seven weeks – though obviously we are the other way round!  As we had had such a lovely lunch at the Great Western Arms then we did the same today.  I had the roast pork which was fantastic and Richard had scampi.  Just look at my banana ice cream pudding. 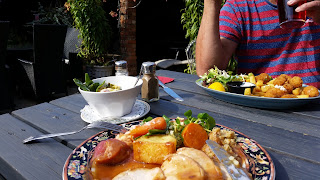 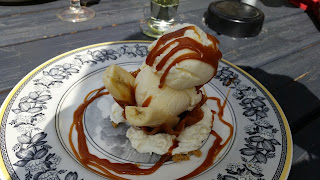 Sitting on the boat during the afternoon and seeing the motorhomes parked up on the wharf made me think about last time we were here.  We had such a great time and it was so lovely to meet up with Paul and Elaine and see their lovely motorhome.  Since they left Aynho they pootled around the UK for a few days and then headed to Calais and have since done 1944 miles around Belgium and France.  I envy them so much – they certainly have so much freedom in their home on wheels and are just moving when and if they please.  Do have a look at their blog.  In fact I realised, as we sat eating our lunch, that out of the eight of us who sat there last time only three of us are in the UK today!  Diane has deserted Ray and gone home to Australia for two months to see family and Sue and Andy are on holiday in Florida.

I sat out on the towpath reading until the sun went down behind the hedge and I got cold.  So it was back inside to continue reading.  It was really nice to have a night off cooking.