We pulled pins about 9.30am and headed downstream.  We dumped the dumpables at Dapdune Wharf – I opened the glass recycling bin and added Richard’s empty beer bottles to those of Klara and FL!!!  There were quite a lot in there!

At Stoke Lock there was a boat sort of across the open lock entrance.  We managed to squeeze past him and when I asked what he was doing he said he was filling with water and his hose wasn’t long enough to reach his permanent mooring.  I did comment that wouldn’t it be easier to buy a longer hose!! 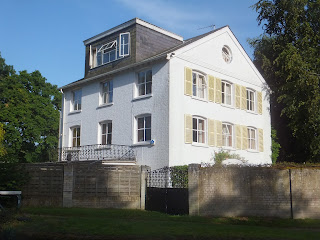 Down through Bowers Lock where Bowers Mill House stands.  It’s not the original mill which had been constructed specifically by the Duke of Sutherland as a laundry to serve Sutton Place which he had then owned. The mill had made paper, flour then linseed but had closed by 1910, with the mill building demolished in 1947.

We pulled over for lunch as Richard likes to stop for lunch but this is the first time we have done it this trip.  Mind you we really did need to stop as I had made soup and it’s not that easy to eat that under way!  I should have made soup before as it went down very nicely.  I’ve been living on a piece of cheese and a banana for lunch.

Richard managed to ground on the nasty bend at Sutton Place – I didn’t say a thing!

As you approach Worsfold Gates there is a huge house on the left with all sorts of things in the garden.  I look at it every time we pass and wonder what it is and I’ve done some research but still can’t find anything!  It probably belongs to a Saudi prince! 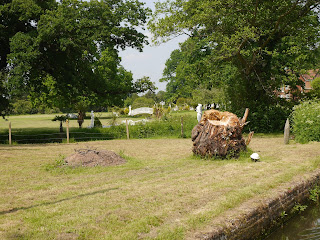 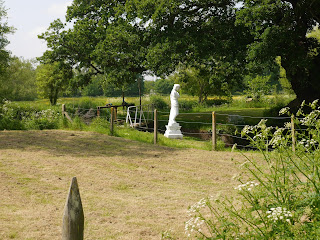 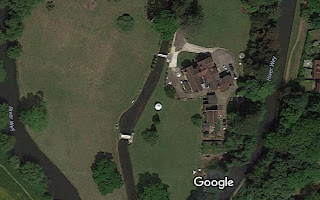 The ‘lock’ at Worsfold is almost unique. As it is only closed at times of flood the paddles on the two sets of gates still use the original ‘peg and hole’ method whereas most of the others have been converted to the modern winch system. 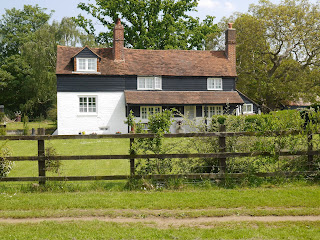 Also at Worsfold is this lovely cottage.  It was originally the New Inn but is now a house and the pub by Pyrford Bridge is the New Inn. 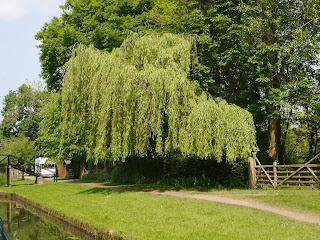 We stopped at Cartbridge Wharf for water.  This was apparently mainly used for trade to Old Woking, although of course goods could be taken by cart over the bridge into the village.

The next lock is Papercourt Lock.  The lock cottage was rebuilt in 1922 on higher ground.  Apparently the lock-keeper at the time was made to make temporary accommodation for him and his family in a barge just below the bridge for a few months. The site had been pegged out by the builders and in the middle of the night, as the story goes, he tiptoed around the site moving the pegs about to make sure that when the cottage was built he would have a good view along the river in both directions to spot approaching vessels without having to leave his cottage. 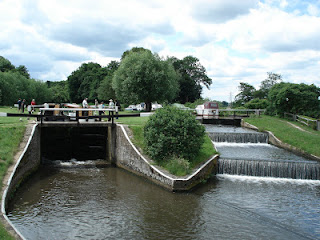 We moored up above Newark Lock almost in the same place as we did before with FL and Klara.  The chairs were soon out along with the beers!