The alarm went off at 7am though I hadn't slept well as the tooth behind my bad tooth was hurting.  So was it another infection or referred pain?

Richard and Muffin walked me to the station and I got my train with heaps of it to spare. There was a line of taxis waiting at Havant and I was home in no time.  Flippin taxi cost £12.60 for 5 miles - the return train from Guildford to Havant was only £15.70!

I had already made the decision to have the tooth out which was just as well as my dentist said it couldn't be crowned as most of it was filling and only had one wall - crowns need as least two walls apparently.  The dentist, Val, warned me that a tooth like mine usually is a problem to extract and could involve some minor surgery - great!!  I sat back in the chair, had a couple of injections and waited.  Val said "can you feel this", "no" I said.  "OK so I'll try this".  "There you are its out". "Pardon".  "Your tooth is out; I'll show it to you in a minute".  Well you could have knocked me down with a feather - I hadn't felt a thing 😀.  The tooth had great long, healthy roots but not much else.

I drove home and felt fine, getting on with the mountain of paperwork that was on my desk.  Victoria came home from work and chatted to me and gradually my mouth unfroze.  No pain but the back tooth was still tender.

I chose to get back to the boat quite early or at least while I was feeling ok so Victoria took me back to the station.  I got on the train but when the guard came round and I showed him my ticket it was the receipt not the ticket!  I had got them both out of my bag in the car and thought to myself that I didn’t need the receipt so left it in the car, or so I thought!  Fortunately, I had the email confirmation on my phone and he was happy with that.

Richard and Muffin were waiting for me at the station – Muffin had filthy legs as he had been mud wallowing!  I gave him a paddle in the river and got most of it off.

As I walked along the river I found this statue of Alice in Wonderland.  Apparently Charles Lutwidge Dodgson, more famously known as Lewis Carroll, came to Guildford as a clergyman in 1868 to find a house for his six sisters.  He brought The Chestnuts, a house just next to the castle ruins. He was constantly in Guildford visiting and wrote the second Alice book, Through the Looking Glass, on one of these stays in 1871.  He lived the last year of his life in Guildford and died on 14 January 1898.  Alice in Wonderland was written in 1865. 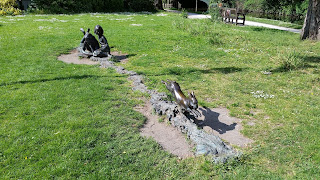 When we got back FL and Klara were having drinks on the towpath so I joined them with a warm coke as I can’t have anything hot or cold for 24 hours.

Just one photo today – I did think about taking a photo of my tooth but decided against it!

I just want to add how cross I am with the dentist in Shepperton.  He removed the nerves from the tooth last Thursday and would have filled the roots on Monday if my dental insurance hadn’t said no.  Then what would have happened?  I would have gone to my dentist when we were next at home only for him to say that it couldn’t be crowned.  I could have had the tooth last Thursday and saved myself a week of pain.
Posted by Linda Gifford-Hull at 09:23