Another day in Thatcham – I know, there could be worse places to be but it’s raining today too.

I had a brainwave – two in two days I shall have to be careful!  As I can’t get any sense out of C&RT I would phone Newbury Boat Company, where we overwinter, as I know they have contacts in the local office.  Emma was, in fact, in an all-day meeting with C&RT but Derek told me that it’s not just that the gate has been knocked off its hinges but the quadrant is damaged.  I have no idea what the quadrant is but it sounds bad.

Our plan was to take the train to Reading to do some shopping.  Richard decided to run the generator for an hour beforehand to charge up the batteries.  As we were having lunch the generator coughed and started spewing out white smoke – and that was the end of it   OK so now what??  We really only had one choice – return to Newbury.  So we donned our wet weather gear (which included Muffin) and tried to reverse back to Monkey Marsh Lock where there is a winding hole.  However, the river had other ideas and kept pushing the bow round so we went forward to Colthrop Lock.  I stayed at the lock while Richard went to the next winding hole to turn round.  25 minutes later he returned and we locked back up.  It was just an hour as we passed where we had been moored! 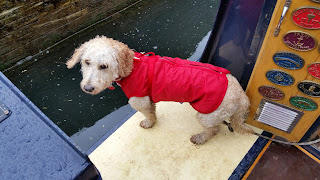 The trip back up was uneventful and, thank goodness, we didn’t get too wet.  Muffin was fed up as Richard wouldn’t let him off at the locks as he had a coat on and he was worried that if he fell in he wouldn’t be able to swim. 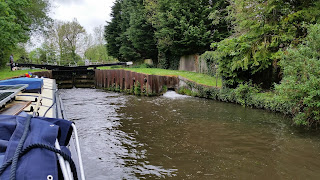 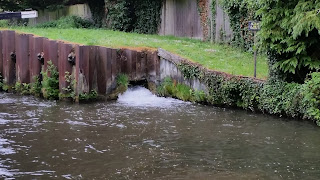 Derek, from Ham Manor, helped us in which was just as well as we are in a space for a 57 footer and we are 60 feet.  That 3 feet made a big difference getting in!  Derek and Emma were extremely welcoming and we soon hooked up to £11.60p worth of free electricity as the boat that was on our pontoon has left the marina.  Something went right – yeay!!

The update from C&RT today on Woolhampton Lock is “After their visit today, our engineers will be back onsite to remove the existing broken lock gate collar on Wednesday 11th May for repair. Once it's removed we should have a clearer idea of how long the repairs will take, and will update as soon as we have more information.”

I hated turning round and going back but I know we have made the right decision as we haven’t heard anything from RCR as to when our new alternator will be fitted.