I had a bad night.  I woke up about 1.30am and my mind and body felt like a coiled spring so I got up and played around on my laptop until my eye lids started to droop – 3am!!!

As you can imagine it wasn’t easy to wake up this morning and, really, for what??  We are not in the nicest of places with a derelict factory/warehouse on the other side of the canal and Thatcham Station a stone’s throw away which is a very busy station.  The lambs are our saving grace – there is one black lamb in a field of white ones.  Diversity!!!! 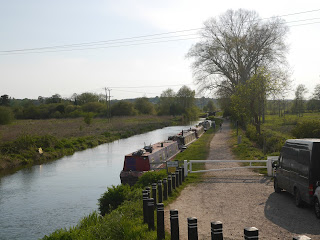 We sat and tried to decide what to do as the forecast wasn’t as good as yesterday which meant that the solar panels might not be able to keep up with the fridge and freezer.  We made the awful decision to go back to Newbury where we could be on mains electricity until the new alternator arrives.  In a throw away comment I said that we ought to put on the list for the winter to get a generator.  Richard thought this was a brilliant idea and we started to research them.  We then had another brilliant idea – to get my daughter, Victoria, to come up in our car so that we could go and get one.  Which is exactly what we did :-)

Fortunately for us Victoria isn’t working at present.  She recently made the brave decision to make a career change.  She left her marketing job last week and is starting work next week as a care assistant before going to Southampton University in September 2017 to train as a mental health nurse.  I am so proud of her for making such a life changing decision.

Victoria arrived and dog sat while we went into Reading and picked up a small generator from Screwfix.  Richard assembled it and we then became one those horrid noisy people with a generator! 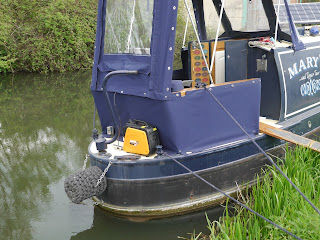 C&RT said that they would put out an update on Woolhampton Lock at 1pm.  Of course that didn’t happen until 5.45pm.  “We’re in the process of assessing the damage caused to Woolhampton Lock over the weekend.  Engineers will be onsite from tomorrow to decide how best to fix it, and we’ll have more of an idea about the scope of the works over the next few days.”  Great!!