I woke up with no toothache but it didn’t take long for it to start up again.  Fortunately, it hasn’t been keeping me awake at night. 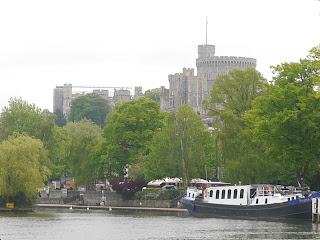 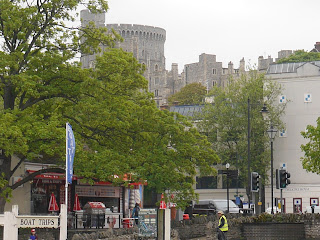 As we left Windsor I took the obligatory photos of Windsor Castle and also saw this little house opposite with a floating garden extension complete with hammock! 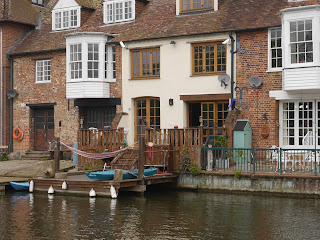 We went through Romney Lock but when we got to Old Windsor Lock it was on self-service.  The lock was full but there were two boats waiting to come up so they decided to empty the lock even though they could see we had arrived and could easily go through.  I said wouldn’t it make more sense to let us through as the lock was full – oh yes, we didn’t think about that was the reply!!
The locks kept on coming and my toothache got worse.  Thankfully Shepperton Lock was our last and we really wanted to get onto Manor Park as the dentist is only a short walk from here – there were just two places left and we only need one :-)

I fiddled around just waiting for my appointment time.  I was in the dentist 10 minutes early and they were ready for me.  Into the chair and, to cut a long story short, I had the nerves taken out of the tooth, antibiotic stuffed down the hole and then a temporary filling put in.  That took almost an hour.  I’ve now got penicillin to take and I’ve got to go back for another hour’s session on Monday :-(  I will then need to get the tooth crowned at some stage.  I’m £142.50 down so far!

Back to the boat with a very frozen mouth but no pain – wonderful :-)  I tried a coolish cup of tea which went down a treat.  I hadn’t eaten or really drunk anything since I gave up on my porridge this morning.  As the mouth started to thaw there was still no pain.  I had a banana sandwich for dinner with the crusts cut off – it was heaven!