A very wet morning greeted us today but we were expecting it.  Sadly I’ve had toothache for the last couple of days and it is getting worse so we have had to change our plans a bit.  We were just going to Boveney Lock today but we are now hoping to get to Shepperton or at least Staines so that I can go to a dentist in Shepperton tomorrow.  As many of you know I used to live in Shepperton and even though my old dentist isn’t still there I feel happier going to the same practice.

We ploughed through the rain and 3 locks before coming to Boveney Lock where we found NB Festina Lente and NB Klara.  We knew they were there and had arranged to come alongside for a coffee.  It was lovely to see Sue and Andy again and meet their daughter Nikita.  We also met Roly and Bev from Klara.  We had our coffee and the rain seemed to stop and the sky got a little brighter.  By this stage I had arranged my dentist appointment for 4.40pm tomorrow.  FL and Klara were going down into Windsor so we decided to join them as we aren’t now in such a rush for tomorrow. 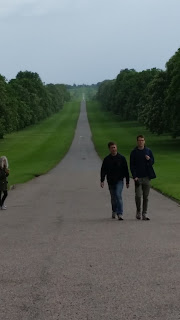 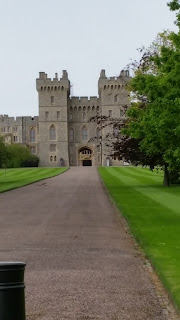 We managed to moor on the Island, in fact we were the only boats there.  It’s the first time we have managed to moor there.  We all walked into town – Sue and Nikita went “mother and daughter bonding” otherwise known as shopping!  The rest of us went to the Two Brewers – a pub which was established in 1792, although the building dates 1709. It is situated in Park Street, one of the most architecturally distinguished streets, and oldest streets in Windsor. It nestles in a now quiet corner by the Park Street gates that leads onto the long walk and the Cambridge Gate entrance to Windsor Castle & Windsor Great Park.  When Park Street was the main road to London out of Windsor, it would see the rolling stage coaches their horses fresh from the stable yard settling into their stride on the way to the Metropolis. 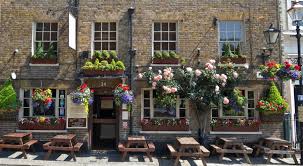 We had hoped to eat in the Two Brewers but they were fully booked so we wandered down into Eton where Andy knew of another dog friendly pub where we could eat.  The Prince George had a table and we had an OK meal followed by Eton Mess – what else?? 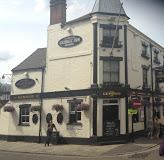