A day off in a lovely spot.  It was a hot day but we were under the trees so it was cooler.  The moorings start quite close to the lock and it was fairly busy but it gave us something to watch! 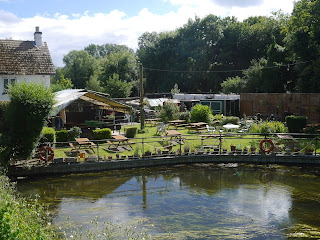 I had a lazy day as I hadn’t slept well and managed about 15 minutes sleep during the afternoon.  If I had the door and windows shut to keep out the voices of passers-by, I was hot.  If I opened them the chatter kept me awake!  I think in the end fatigue took over.

Richard, however, had a busy and productive day.  He finished re-doing one side of the gunnel with non-slip tape and then painted it and also sanded and varnished the taff rail. 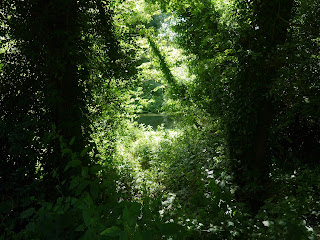 We had the long awaited BBQ.  Richard cooked the meat while Dot produced lovely salads and homemade rolls.  Added together with lots of wine - sparkling, red and white and finished off with cheese and biscuits – a wonderful evening.  I think we finally left the towpath about 10pm.
Posted by Linda Gifford-Hull at 17:07