It was going to be another hot day and we had a mission to accomplish!

We got under way just before 10am to go up to Harefield Marina, turn round and then go back into Uxbridge.  We got to Denham Deep Lock and it was in our favour but there was no sign of Ewn ha Cul and there were two boats at the bottom waiting to come up so I turned it for them.  When they had come up it was our turn to go down and of course I had to set the lock again!  It’s a hard lock – stiff paddles and heavy gates.  It was then down through Uxbridge Lock where we pulled over and Ewn ha Cul went into Denham Marina for diesel.  Richard, Muffin and I walked up into Uxbridge and caught a bus to West Drayton Station.  As an official now, I have a bus pass, so used it for the first time :-)  We got to the station and I walked on to Tesco while Richard waited for Brother-in-Law, Jim, who was coming up from Devon on the train.  I did my shopping and by the time I was finished Richard and Jim were waiting for me.  It had started to rain and I called a couple of taxi companies but neither of them would take the dog – it’s not as if he is a big dog!  I then contact Uber and the taxi arrived within minutes and the driver was happy to take Muffin.

Back on Mary H with our mission accomplished it was lunchtime and a goodbye to Dot and Gordon – hopefully we will get to see them again somewhere this summer. 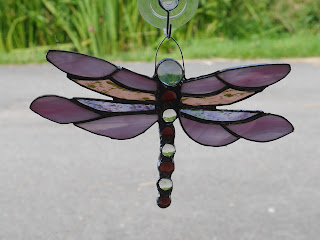 Dot has made me a lovely dragonfly in stained glass which goes really nicely with our pink themed interior.  She made us a lovely sailing boat a couple of years ago for the boat but it’s now at home and I like it there.  (The photo was obviously taken on the boat and not at home!) 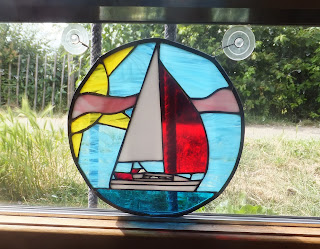 The three of us (and Muffin of course) set off back to above Denham Deep Lock.  We shared the locks with a day hire boat with lots of people on board so I didn’t have to do a thing – well I had done the Deep Lock twice already! 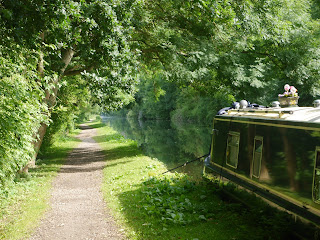 We moored up just in front of Deck of Cards and sat (and slept) in the shade.  Gill and Phil (Deck of Cards) came and joined us and we had a good old chin way until about 8pm.  Really nice to meet you guys and I hope our paths cross again soon.