We moved across the canal to the Tesco side and filled with water.  There is a big sign in the Tesco car park which says Recycling so I took the empty wine bottles to dump them.  But no, it’s now a car park and there was no sign of any bins.  I looked around the car park but couldn’t see any anywhere.  I’m ashamed to say that I dumped them in a rubbish bin.

Even though we had a nice Tesco near us last night we went on to the Tesco in Yiewsley where we knew (or hoped!) that we could moor both boats.

We found moorings at Tesco though we grounded.  I did a big store cupboard shop and got a summer duvet.  We have managed to leave our usual one at home which I am cross about and, as it is about to get warm (!), we need one.

Between us all we managed to get Mary H afloat again and headed off.  We made a brief stop at Packet Boat Marina to empty the loo and headed to Cowley Lock where we found two volunteer lockies who eventually did some work! 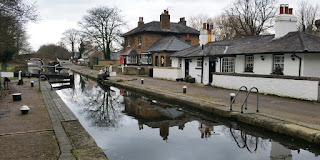 It was then to Denham Marina for fuel and gas as both boats needed some.  There was already a boat on the fuel pontoon so Gordon decided to leave it to Sunday when we return back down the canal. We ended up doing Uxbridge and Denham Deep locks with Deck of Cards (the boat that was on the fuel pontoon) as Ewn ha Cul had gone ahead to prepare the lock and another boat had come along so they went up with them.  Denham Lock is the deepest lock on the Grand Union Canal - bringing the canal down by 11 feet 1 inch. 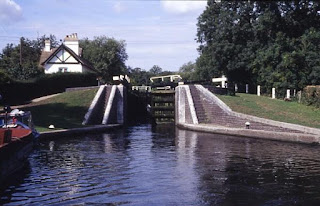 We moored up just above Denham Lock and had planned a BBQ but decided that tomorrow is going to be a nicer day so we changed our plans – just as well as it began to drizzle and became a rather unpleasant evening.