It was a hot night so we closed the cratch on the towpath side and left the front doors open (we are reverse layout).

We were under way by 9.15am wanting to get going before it got too hot.  I walked to the first lock with Muffin and it was lovely beside the canal and under the shade of the trees.

Coming in to the second lock we spotted this a long way from home! 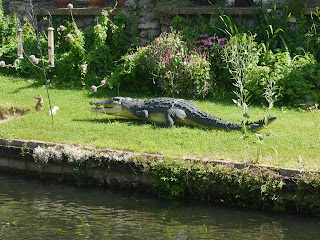 This lock is Black Jacks Lock where there looks to be a very nice B & B.  The Mill was built in 1840 and stands in 6 acres which includes three islands, four bridges and over a mile of private river. The current building stands on the site of the original mill, which was recorded in the Doomsday Book of 1086.  As legend goes, Blackjacks Mill was named after a serf who used to deliver flour using a donkey and cart. He was a cruel man and treated the animal so badly that local children used to call after him, "Black tempered Jack!"  Over the years the name transferred to the mill. 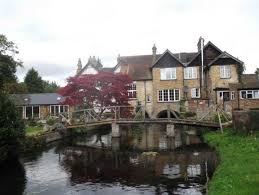 There is water at the third lock so we pulled over and filled the tank and took the opportunity to have coffee. 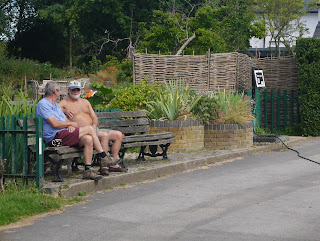 We pulled over at Tesco at Rickmansworth to top up the milk and lager, had lunch and started to look for somewhere to stop as it was so hot.  Inside the boat it got up to 33° - I hate to think how hot it got on the deck in the sun.  OK I’m now going to have a rant! CONTINUOUS MOORERS – there I’ve said it.  All the best places were taken – bearing in mind we needed a shaded spot.  Boats all shut up and filthy with rubbish everywhere. 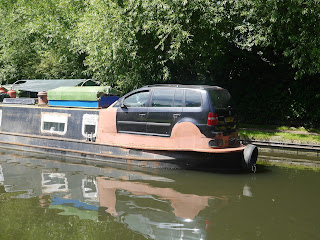 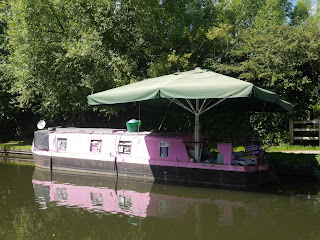 We ploughed on to Cassiobury Park.  I knew from reading blogs that there are some nice moorings there but, guess what, CONTINUOUS MOORERS and some unpleasant smells :-(  We pulled in twice, then I walked on ahead to see if there was anywhere better – third time lucky I found a lovely spot above Iron Bridge Lock.  Chairs out, gin and tonics (it was only 5.15pm!) and a lovely relax before Richard cooked a scrummy BBQ. 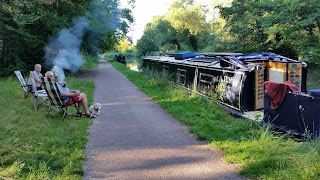