A horrid muggy night.  I had all the curtains and windows open except the curtain on the towpath side – well one has to have some modesty!  But we were still hot and this morning I felt like a wet, wrung out rag!


We were under way at 8.45 am stopping after the second lock to use the services.  Unfortunately, a wide beam pulled away before us and they were so slow.  They did speed up a bit when I told them we were on a mission but with only one person doing the locks they were just slow! 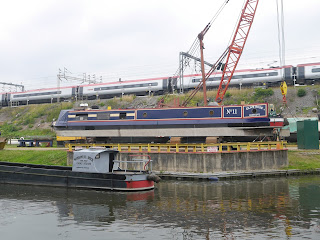 Let me tell you about Mimas.  We were at Lock 60 helping the widebeam out of the lock and preparing to turn it in our favour when suddenly a chap on a bike appeared and said that there were two boats coming down.  So we waited.  Mimas, an Ovaltine working boat, was there quite quickly but there was no sign of the second boat.  “Bike man” said that he wasn’t waiting and shut the gate and opened the paddles at the bottom.  At that point a narrowboat appeared.  The crew were not happy bunnies – and I don’t blame them.  Apparently at their last lock “Bike Man” had appeared as they were about to shut the gates and said that another boat was coming.  They waited 4 minutes for it to appear.  As the bottom gates were open Mimas shot out of the lock and “Bike Man” prepared to cycle off.  The narrowboat crew asked if he was going to shut the gate and he said no, the lock has to be left empty and leaving the gate open is as good as lifting a paddle and anyway they were in a hurry.  Not very PC in my book.

I’ve had a look on the internet for Mimas and see that it was once a lovely working boat and won the Ken Keay Award for wooden narrowboats in 2010.  Sadly, in the last six years it has been left to rot a bit and is looking very sad.  A. Wander & Co, the Swiss company, made Ovaltine in Kings Langley.  They had their own fleet of boats built to deliver coal to the factory from the Warwickshire coalfields. The boats were built by Walkers of Rickmansworth and were maintained spotlessly and served as a floating advertisement for the company’s product.  I’ve borrowed these two photos from Moore 2 Life’s blog as I didn’t have time to take any myself which is a shame as you could have seen how much it has deteriorated. 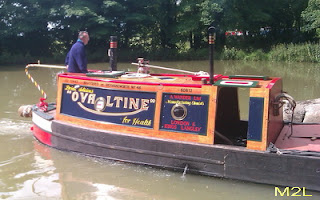 We pulled over for lunch and decided not to move again today.  I was pretty grumpy and, I think, the men were pretty knackered too after the hot days.

Richard cooked a BBQ in the evening which was, as usual, scrummy.  We bought a new BBQ last summer and only used it once but Richard has really got the hang of it.