A day off?  Well not quite!

We woke up to rain so I turned over and went back to sleep.  I have to admit to not getting up till quite late – how late I’m not going to say!!

It cheered up so we had lunch and moved on and, in fact, it became a lovely afternoon.  We stopped at Giffard Park to use the services – gosh that tap is slow.

We didn’t go far – just motored through the lovely parks and stopped just before Bridge 75.

We did however see this boat with it’s whirly gig up and the washing on it – I’ve never seen that before!  It also sells coffee and ice cream. 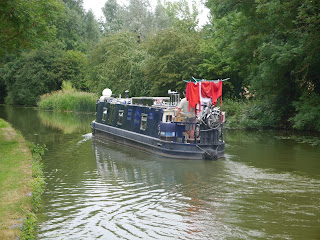 The Bedford and Milton Keynes Partnership (B&MK) was established in 1995 with plans to build a 16 mile canal connecting the Grand Union at Milton Keynes to the River Great Ouse at Bedford at an estimated cost of £170 million.  The first element of the canal was an underpass under the A421, completed in 2009 and efforts are continuing to obtain funding to complete the scheme in 'bite-size chunks'.

From Milton Keynes, the canal is planned to pass beneath the M1 utilising an existing cattle creep, then cross over Brogborough Hill, and across the Marston Vale through to the River Great Ouse in Kempston. 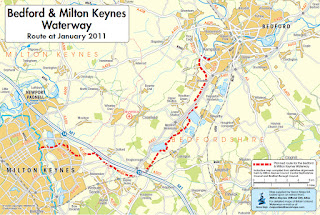 The roots of the Bedford-Milton Keynes Canal go back 200 years to October 1811 when a group of Bedford businessmen met with the Mayor of Bedford to discuss the trade benefits to be gained from a link the River great Ouse and the Grand Junction Canal. Local roads were poor and they hoped that the canal would lead to greater prosperity for towns along the route and into the Fens. The Mayor of Bedford, Charles Short, called a meeting for Monday 4th November at the Shire Hall. A prospectus was published. Sam Whitbread and the Duke of Bedford were among the supporters of the scheme. William Praed, chairman of the Grand Junction Canal, was enthusiastic and agreed to fund half of the cost. They commissioned John Rennie, the famous canal engineer, to survey the route with his colleague, Francis Giles.  However the advent of the railway, followed by the internal combustion engine and a growing network largely replaced waterways as transport routes over time. In 1846 came the Bedford to Bletchley Railway which largely followed the route of the 1812-13 canal. The railway seemed to have sounded the death-knell for further canal development, although in 1892 a company called “The Ouse River, Canal and Steam Navigation Limited” attempted to acquire the rights of the river and to build a canal between the Ouse and the Grand Union.