Just 2 locks and we were on the summit :-)  We stopped for water at Cow Roast lock and then moved a short way along the canal as we were taking the bus to Aylesbury (quicker than doing 16 locks down and then the same coming back!).  It is only a short walk from the canal to The Cow Roast Inn where the bus goes from.

Why Cow Roast?   Well the 'Berkhamsted and District Archaeological Society' began excavating the area of Cow Roast in 1972 and found a number of Roman artefacts along with a number of different bones were found from a variety of animals however the most commonly found bones were that of cows with over 40 being discovered. This is likely due to it being used as a drovers' route so that cattle could be taken to London to provide meat; the cows and their drivers would rest overnight before continuing their journey onward. The current name "Cow Roast" is believed to have come from the corruption of its original name "Cow Rest".  The area is one of the most important Late Iron Age and Roman industrial landscapes in England” despite being almost completely unknown and unexploited by tourism.

Anyway back to Aylesbury!  We had moored there back in 2010 and I knew that it had all changed but was rather surprised at what I found – a mass of concrete “wharf”. 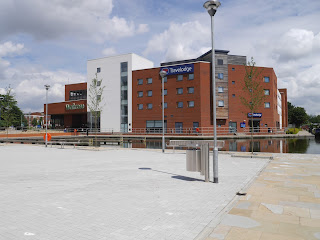 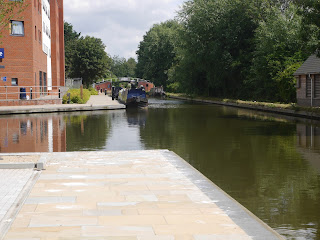 In front of the Travel Lodge/Waitrose is a “marina” which looks as if it is a secure one using, I assume, a C&RT key to get in and out of.  However, it is in full sun surrounded by buildings and the few boats that were visiting Aylesbury were on the canal.  I do get the feeling that the local Council have missed out here as there were no cafes or bars to use the, what could be, lovely area.  The old tax office, which we moored beside last time, is being converted into flats but I can’t find any details online about them.

We walked into town looking for a lunch spot and found a market :-)  I bought raspberries, strawberries and apricots which looked lovely.  It was then to the Harrow Pub for lunch.  The men had ham, egg (3!) and chips and I had a brie and field mushroom burger.  We can certainly recommend the pub.

On our way back to the bus stop Richard bought us all an ice cream and we sat next to this lion and ate them.  I just love the way he is sleeping next to the meat van – let alone his hat! 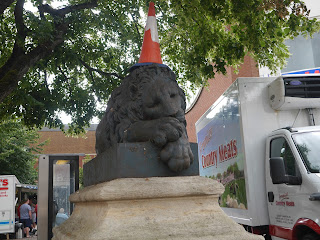 We just missed a bus but they run every 20 minutes so we didn’t have to wait long.  Disaster struck us though as we went to get off the bus.  We were all sitting on the back seat and Richard and I went to walk down the bus and were followed by Jim who, somehow, missed his footing (there was a step) and fell flat on his face!  There were only 3 other people on the bus, thank goodness, and they all rushed to his rescue.  He insisted that he was unhurt and got up though he did admit that he was shaken.  Of course Jim was carrying the fruit and there were strawberries and raspberries all over the bus floor!!  These were duly picked up and put back into the bag!  When Jim felt OK we got off the bus and he sat in the bus shelter for a while before we headed back to the boat.

As we had eaten at lunchtime it was just bread and cheese for supper.

I was worried about Jim all evening as he had hit his head but he kept insisting that he was OK though by 9pm he wanted to go to bed.

These are just two more photos I took in Aylesbury. 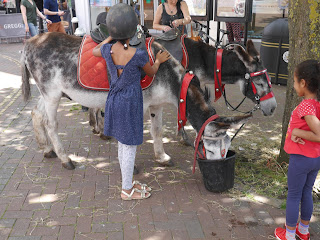 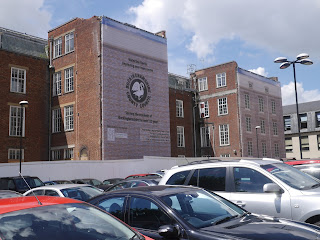