A nice bright morning though we did have a drizzle shower.  It was just over an hour to the bottom of Stoke Bruerne Locks where we filled with water before going up. 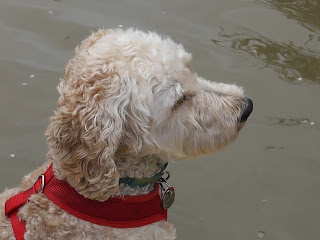 We shared the locks with Christian and Emily on A2B with their little dog, Toby.  Up through the first lock then disaster happened at the second.  I was just starting to raise the paddle to empty the lock when I noticed a boat coming down so I quickly went to lower the paddle. I wasn’t looking and knocked poor Muffin off the beam.  He fell about 12 feet into turbulent water as the gates were leaking so badly and I hadn’t completely wound the paddle down.  I ran down the steps to encourage him to swim to me but the turbulence wasn’t having any of it. Twice he went under completely and disappeared from sight for what seemed ages and I could see that he was getting tired.  I started taking my clothes off to go in the water but Emily said she would go in.  It was at this stage that I realised that the paddle was still up a bit so I went up, took the ratchet off and let it go down on its own – of course this was one of those paddles that didn’t want to go down on its own!  Before I knew it Emily was in the water and swimming over to Muffin.  She managed to give him a push which seemed to free him from the bubbling water.  I grabbed Muffin’s nose and then his harness and hauled him out.  Fortunately, Richard came along at that moment as I had been shouting at him and between us we hauled Emily out too.  Muffin coughed and spluttered a bit then rolled furiously on the grass.
Both boats pulled over after the fifth lock and I rang a local vet who said that we were to take him immediately as he had been under so many times.  The vet gave me two pet friendly taxi numbers but both were busy however we discovered that there was a bus from Stoke Bruerne to Towcester in 20 minutes so it was a quick walk up to the village.  We had no idea where we were going but a man at the bus stop said that he would show us where to get off.  We then had a 10 minute walk up to the vets where Muffin saw a vet straight away.  He has a slight crackling in one lung so we have anti-biotics and anti-inflammatories in case the water in his lung is nasty.  We sat on a seat outside the vets while I tried to find a taxi to take us home when a lady came over and said that she would take us to Stoke Bruerne!  She lives near the vets so came out of her way for us.  Not only that but she has given us her phone number in case Muffin needs to go back to the vets over the weekend.

We got back to boat and I collapsed.  It had taken three locks for me to stop shaking but all I could see what the swirling water and no sign of Muffin – even now (the next day) I can still see that vision.

We walked back to the lock to have a look and also to rescue the aluminium windlass that I dropped in the water during the fracas.  Fortunately, it was Jim’s windlass that he had left with us and it has two jubilee clips on so the Sea Searcher magnet managed to pick it up.  Our usual windlass is also aluminium but doesn’t have jubilee clips on it – it will have now!!  These two photos give you some idea of how far Muffin fell.  The water isn’t very turbulent as, of course, the paddles were shut. 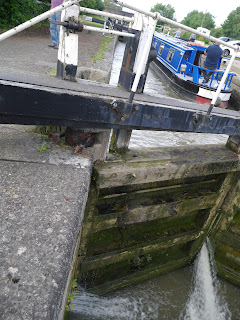 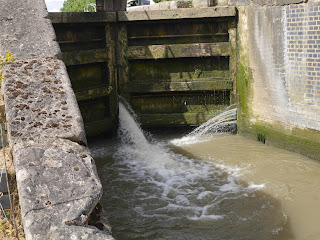 We took Christian and Emily to The Navigation for a meal – it was the least we could do.  They are lovely people and Richard and I can’t thank Emily enough for her selfless and brave action.  Also to the man at the bus stop and Gail (who drove us back).  We both feel gobsmacked at the amount of help given to us by total strangers.