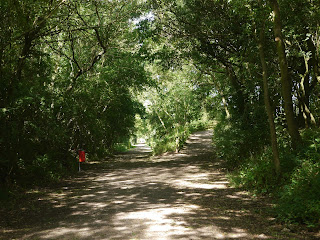 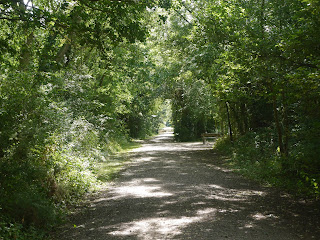 It wasn’t far at all to the Centre – in fact we almost walked past it thinking it was a farm!  We had a wander round but didn’t do the exhibition which I now regret though we did have a very good cup of coffee.
We saw, what looks like, a water trough but it turns out to be a stone coffin and may be 2000 years old.  During the medieval period, monks and friars used stone coffins, sometimes reused ones, to bury their important dead.  This coffin was used as a water feature in a large house. 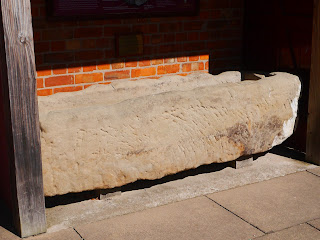 We picked up a leaflet showing us a walk round the battlefield and our first port of call was the sundial and memorials to both Henry VII and Richard III. 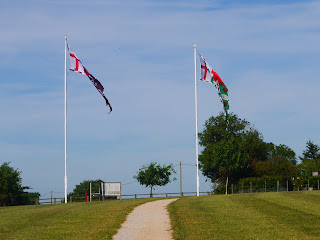 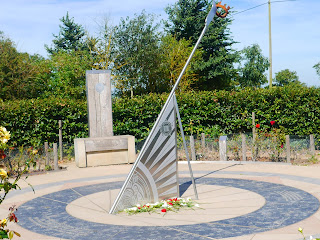 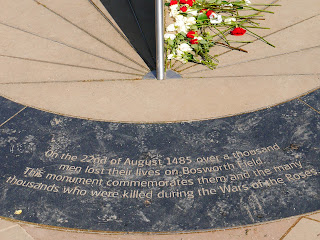 On the 22nd August 1485 Henry Tudor brought a small rebel army to face the much larger Royal army of King Richard lll.  The Stanleys, whose loyalty to either side was as yet unknown, were positioned between the two armies, but to one side.  The Earl of Oxford was Henry’s military commander and he led the main army and attacked King Richard’s right flank, commanded by the Duke of Norfolk. Eventually, the Earl of Oxford defeated Norfolk’s army and the Duke himself was killed.  Meanwhile, the Yorkist Earl of Northumberland, standing with a sizeable army supporting Richard’s left flank, did not move, possibly because of the marsh in front of him and the Stanleys on his flank.  With the battle not going his way, Richard saw Henry Tudor with only a small force of soldiers on the field. He rallied his mounted knights and led a mounted charge across the battlefield trying to kill Henry. At this point Sir William Stanley attacked - on Henry’s side.  Richard was surrounded by his enemies, and lost his horse in the marsh. However, he fought on, vowing to win or die as the King of England.  King Richard was cut down “in the thickest press of his foes”. Even his enemies describe him as dying like a valiant prince.  His crown was picked up and given to the Stanleys who unofficially crowned Henry Tudor as King Henry VII of England at Stoke Golding straight after the battle.

Can you visualise going into battle knowing that one of the armies could fight either way! Imagine if the Stanleys had decided to support Richard and not Henry - history would have been very different!

After King Richard III was killed he was taken to Leicester where he was laid out for public viewing for two days and then quietly buried in the church of the Franciscan Friary on 25th August 1485.  Many people believed that his body was dug up in 1538 when the Friary was closed down by Henry VIII and that his bones were thrown into the River Soar.  This was reinforced by sightings of a stone coffin, claiming to be King Richard’s, outside two different Leicester pubs in the 17th and 18th centuries. 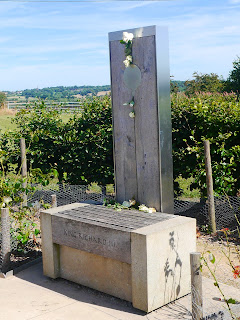 Based on the written theories available in 1973 Leicestershire County Council chose Ambion Hill Farm to be the location for the Country’s first Battlefield Interpretation Centre to commemorate and tell the story of the bloody events of 22nd August 1485.  Since 1973, many have expressed doubts about the validity of the site. To mark the 500th anniversary of the battle, Dr. Colin Richmond published an article in August 1985 claiming that the battle was actually fought elsewhere. Dr. Richmond’s account was controversial enough to make the front pages of both The Times and the Guardian newspapers.  This was just when Prince Charles and Princess Diana were due to visit the heritage centre for the anniversary.

Our walk took us to Shenton Station, the end of The Battlefield Line.  We hadn’t timed things very well and had over an hour to wait for a train and then when it did come it was a diesel car :-(  Apparently they only run the steam trains at the weekends and on Bank Holidays but it doesn’t say that on their website.  “Locomotive hauled services may be occasionally substituted for railcar on some days.”  When Richard went to speak to the guard Muffin leapt aboard – he just loves trains.  However, we decided not to go as it is the steam trains we love. 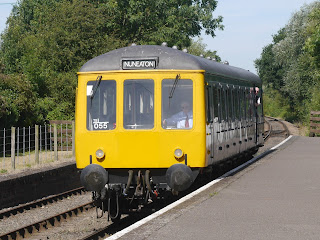 The Ashby and Nuneaton Joint Railway opened on 1st August 1873.  The railway was primarily built to transport coal from both the North West Leicestershire and South Derbyshire coalfields.  The railway also moved livestock to and from Market Bosworth, bricks and tiles from factories as well as passengers.  Timetabled passenger services finished in 1931 apart from special excursions which continued until the early 1960's. The line closed completely in 1970.

We walked back on the lower path and ended up on the towpath.  Our walk took us on the other side of the canal to Mary H and I managed to get a decentish photo. 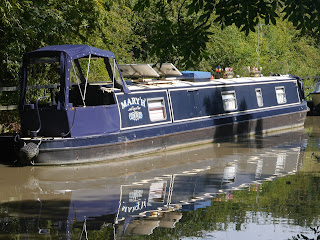 We crossed the canal at Sutton Cheney Wharf and stopped and the café for lunch.  I had a fabulous prawn salad.

It was then back to the boat and, as the weather was so nice, we decided to move on.  We stopped at bridge 23 again and I went back to the Spinneybank Farm Shop as the meat I bought there the other day was amazing.  I can thoroughly recommend a visit to Elaine in her shop.

We finally pulled over just before Hinckley at Bridge 19.

I’ve just worked it out that our visit to the Battle of Bosworth site, wherever it actually is, was 531 years ago yesterday since the actual Battle!