We were up early and away from our lovely mooring by 7.45am.  It was a great place to stop and to top the lot we had internet and phone (inside the boat too) which we hadn’t had for the last two nights.

Down two locks to Kilby Bridge where we used the services. Then at 9.20am we approached Kilby Lock to find we had lock buddies – YEAY! This is first time since Stoke Bruene that we have had help.  The other boat was Away Days with Aaron, Michelle and their daughter, Trinity. 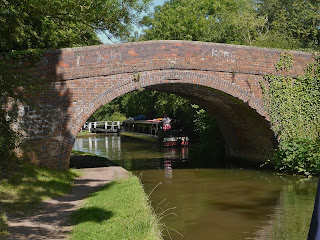 The locks kept on coming but when you have company, good company, it doesn’t seem bad at all.  Richard and Aaron did the locks while Michelle and I looked after the boats.  It’s also nice to share locks with like-minded people who work locks like we do. 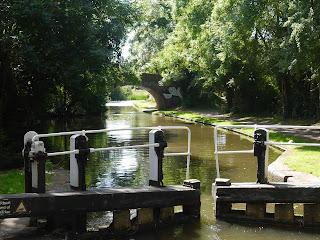 We heard from my son that they should be in Leicester about 2pm so that solved our dilemma – we would stop below King’s Lock.  We descended the lock and took the last two spaces – well only needed two!  We tied up at 12.55pm – 5 hours and we reckon on doing no more than 5 hours a day.

At King’s Lock there is a tea room and it looked really busy on a lovely sunny summer afternoon. 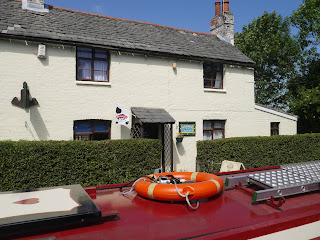 We had a quick lunch, tidied up and showered and waited for our guests.

Robert, Laura and Victoria arrived about 2.30pm and we sat out on the tow path hearing all about the wedding they had been to and, of course, there was a lot of baby talk :-)  There is 6 weeks and 6 days until the due date.  The towpath was quite busy with people walking up and down to the tea rooms and it was quite narrow too so it was quite intimate at times!  Of course I forgot to take a photo but Victoria took this one of Robert who had decided the top of the boat was more comfortable than a deck chair. 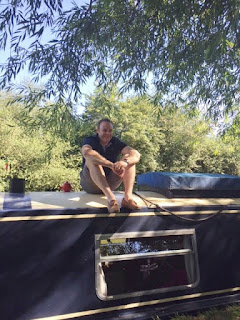 We couldn’t decide what to do for dinner but in the end a Chinese was decided on.  We ordered on line and Robert and Victoria went to get it.  There was SO much food it was crazy.  I thought about asking Aaron and Michelle if they wanted some!  We couldn’t eat it all.

Robert and Laura went off to the Hilton Hotel and Victoria stayed with us.