Robert and Laura came for breakfast – or rather they brought their own breakfast!  We always have porridge and none of the kids fancied that.  It was all too soon before they had to wend their way back to the South Coast.  It’s been lovely having them here – I do miss all three (and a half) of them when we are away.  Things will be different next year when the baby is here!

Bridge 105 is a pedestrian bridge which leads on to a medieval Packhorse Bridge.  The bridge probably dates from the 15th century, with later additions and alterations. It was built to provide a dry route for horses laden with packs on their backs to safely carry cargo across the damp and swampy ground of the river floodplain.  The bridge itself is long and narrow. Originally it was up to 200-metres long, but the structure that remains today is about 50 metres in length.  The bridge is a Grade II star listed building and was scheduled as a monument in 1987. 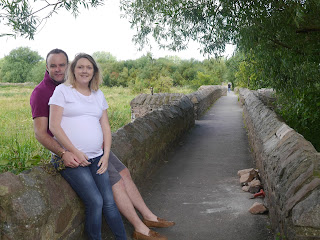 We had arranged to continue today with Days Away and set off just after 11am.  The approach to Freeman’s Meadow Lock was quite hairy.  There is a weir there plus today the wind was blowing the boats over too.  Michelle and I had struggled to keep the boats by the bank whilst waiting for the lock to be ready.  Richard had to come and hold the boat while I got on and got the engine going on pretty high revs.  I could feel the boat being both sucked and blown towards the weir and for some unknown reason the big orange buoy things that they put across weir entrances stop about 40 feet from the lock entrance.  It was the first time that I had felt uneasy whilst steering the boat.  The photo only shows the weir – I forgot to take a photo of the lack of buoys. 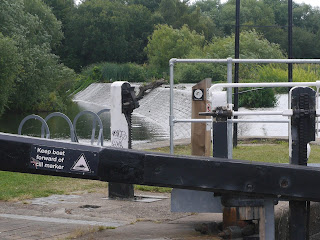 Freeman’s Meadow Lock also overlooks the home of the victorious Leicester City FC.  We have passed a lot of houses flying the club’s flag. 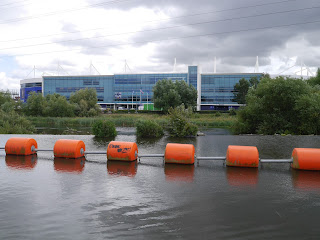 It was then down through Leicester and along the Mile Straight.  I discovered that there is a Tesco Express right by Mill Lane Bridge and there are bollards and rings there so a great place to stop for the essentials. 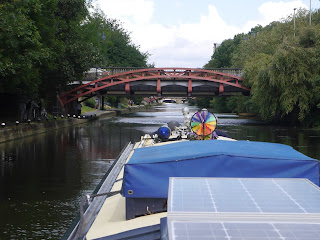 There is a new pontoon being built outside “Friars Mill, the oldest factory left in the city. Opened in 1790, it produced woollen yarn from raw fleeces. Closed in 2000 it fell into dereliction until it was badly damaged in an arson attack in 2012.  But now it’s rebuilt, and will be home to several businesses.  Part of the redevelopment proposal involved installing a mooring pontoon with services, and that’s there now and appears to be open, though I‘m not sure that the service block is yet finished.”  This part is brazenly borrowed from NBSeyella’s blog.  I hope you don’t mind Geoff :-)  The photo is mine though! 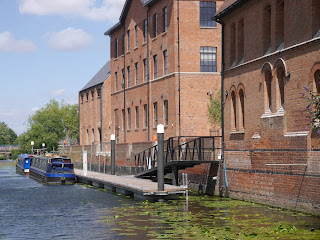 Just before North Lock there is some wonderful graffiti – this is only half of it, I couldn’t get a photo of the other half. 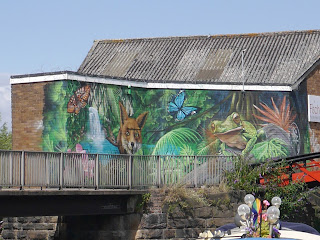 Down through Birstall Lock where we had thought about mooring on Sunday – it was rammed so it’s just as well we didn’t go.

Our favoured place for tonight was below Thurmaston Lock and we were really pleased and surprised to find it empty.  Just enough room for two boats. 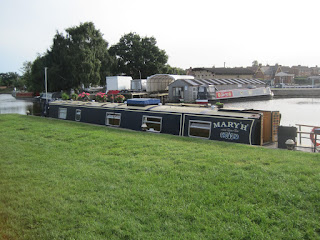 We sat out and chatted until about 8ish when Richard and Aaaron went to get fish and chips.  When Richard got back we discovered that we only had chips, mushy peas and beans – no fish!!  Richard had thought it was cheap but assumed it must be cheap around here!