We had a leisurely start as we weren’t going very far.  Through Saddington Tunnel and then the locks started coming.  One good thing about the locks we did today is that the gates are all nice and easy to push which does have its down side as they swing open very easily when you have shut them!  We kept coming across locks with one of the bottom gates open and it wasn’t the boat in front.

Just below the first lock they were obviously having a wedding reception in the garden.  There was a lovely marquee, bar, beer garden, bouncy castle but best of all lots of tents for people to stay in – what a brilliant idea. 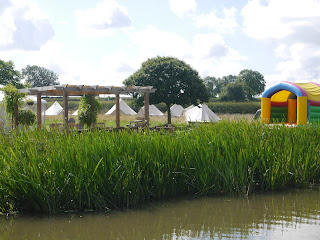 At the second lock one horse and two ponies shared the lock side with me.  I think the wedding reception was probably being held in their paddock!  I hope someone had cleared the field up properly! 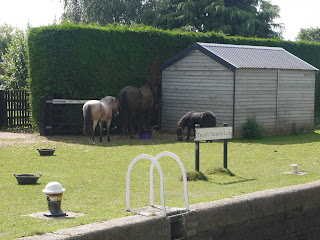 Even though we had no one to share the locks with and most of them were against us they were a joy to operate, especially after the Grand Union locks.  Richard and I worked them between us with both of us vying to walk between the close ones! 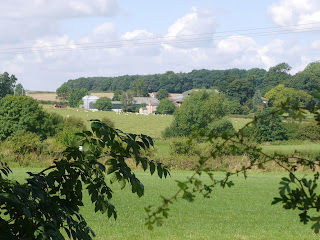 We had planned to stop at Kilby Bridge.  My daughter, son and daughter-in-law are coming to see us tomorrow on their way back from Newcastle where they have been for a wedding.  Robert and Laura are going to stay in a hotel and Victoria will stay with us on the boat.

However, just before Tythorn Lock (28) there was a stretch of towpath crying out to be moored against so we decided it would be rude not to!!  We were only two locks short of Kilby Bridge anyway.  It was a hot day and our mooring was nice and shady so the chairs came out and we relaxed until we discovered that the pub at Kilby Bridge is closed for meals on a Sunday evening.  More research showed that most of the local pubs are the same.  So what to do?  I won’t go into all the different options we came up with!  These were all scuppered though when Robert said that they have booked the Hilton Hotel which is nowhere near Kilby Bridge!  My suggestion had been for the Holiday Inn in Leicester and very close to Castle Gardens moorings but Robert had already paid for the Hilton!  We gave up trying to plan and decided just to set off early in the morning and see where we get to and go from there!! 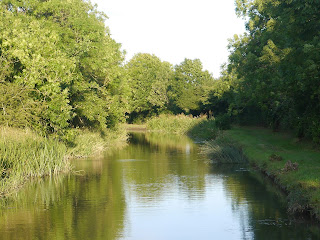 It was a lovely evening and the above is the view from the back of the boat.