It rained again in the night but the morning was sunny and bright.

We set off towards Braunston hoping that we would get a mooring there on the Friday before a Bank Holiday.

Up through Hillmorton Locks where there was only one volunteer lockie on duty.  The locks were full of hire boaters who hadn’t the foggiest what they were doing and certainly didn’t know about the etiquette of helping!  I seemed to be helping work the other lock in the pair. 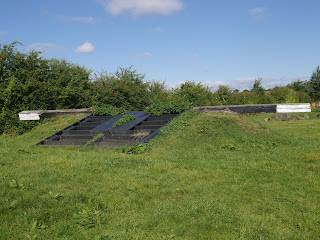 Down passed Barby Moorings where we moored in the winter of 2013.  I didn’t notice any changes though the island is looking very green and there are lots of boats in there.  It is popular as the price is very competitive. 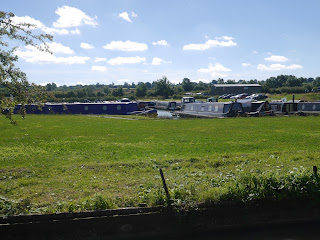 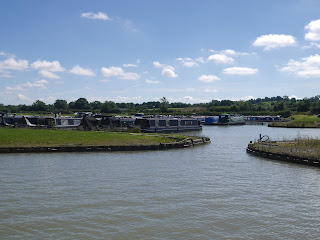 A new 550 berth marina, Barby Pools, is being built by Bridge 81.  According to the developers the marina will provide around 100 extra jobs and improve the ecology of the site. There has been huge criticism of the project though by campaigners, leading to a recent protest led by actors Timothy West and Prunella Scales.  Back in 2012 Tim Coghlan, director of Braunston Marina, who was opposed to the plans said: "The businesses that are really going to be affected by this are the hire boat companies that work around here.  People will not want to hire boats because of the level of congestion in the area. There are already up to two-hour delays.”  As we passed it was just a huge hole in the ground and it is 4 years since the planning permission was granted.  Richard said that he could see earth movers moving around so I guess things are happening.  I can’t seem to find any more information about it on the internet but the marina website is up and running.  There is no phone number on the website otherwise I would have phoned – nosey me!  This map of the layout is taken from their website. 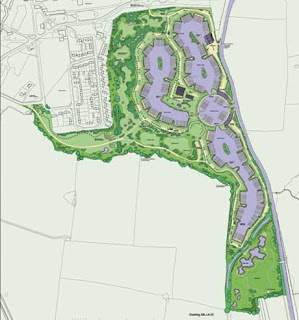 Around this area there are a lot of ridge and furrow fields.  These go back to the Middle Ages and gives pasture fields an undulating, corrugated appearance.  The ridges were made by ploughing in a clockwise spiral, starting in the middle of the strip and eventually ploughing around the outside edge, with the plough constantly throwing the soil to the right. An anti-clockwise motion was adopted in the fallow season to cast some soil back towards the furrow and prevent cutting too deeply into infertile subsoil.  Typically, each ridge measured a quarter of an acre in area - 11 yards wide, and 220 yards long, its length coming to be known as a `furlong', even though the term technically refers to a block of ridges, of whatever number, lying together within an open field. 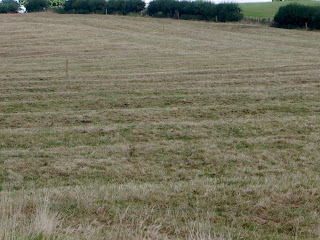 The iconic spire of Braunston Church hove into view.  The church actually has a short west tower with small spire but to me the spire always looks big.  All Saints' Church Braunston has overlooked the village and the villagers for over 10 centuries and the canals and the boat people for over 300 years.  It known as the "Cathedral of the Canals" and has existed since the early 13th century. However, the land on which is stands has been sacred for longer still. 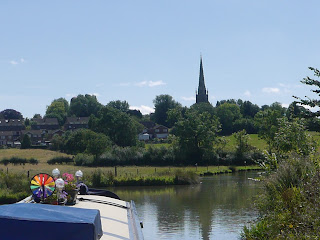 We were meeting up with Sue and Andy on Festina Lente and Sue and I had been messaging each other with possible mooring spots.  The Friday before a Bank Holiday is not the best time to try and moor up in Braunston.  We passed FL and Sue said that Andy had gone to look for a mooring.  We found him just by the first entrance to Braunston Marina with a nice big space but there was an underwater ledge and we couldn’t get in to the side.  Sue walked on and found another space just under bridge 1 so we stopped there.  During the afternoon Richard replaced the non-slip on the side deck – he had done the other side back in May.

Sue and Andy came up to Mary H about 5ish and then we walked up into Braunston to The Plough where we sat in the garden and had an OK meal – for us anyway.