We planned to go up to one of our favourite spots today with FL.

We filled up with water by the café boat – I think they had too many people on one side! 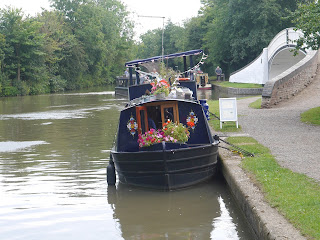 It was then a trip to Midland Chandlers so that Richard could have a moan about our batteries.  We had new ones back in March and, in fact, we have only spent 68 days on board using them.  We have to run the engine night and morning even if we have stopped cruising about 3ish.  MC reckon we have a rouge battery or two and gave us some suggestions for trying to find out which ones.  The other way is to take two out and send them back to MC to get them tested.  MC deliver to Ham Manor once a week so maybe that’s what we will do once we are back there for the winter.

I love the bridges at Braunston Turn and photograph them every time we pass! 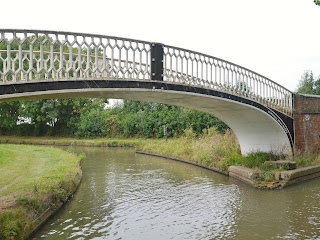 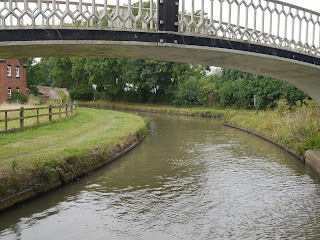 It was then up to Chambers Bridge where we moored up behind FL.

I spent the afternoon trying to get to grips with crochet.  I had planned to crochet a small blanket for my new grandson.  I’ve had everything on board since the beginning of May and it’s beginning to dawn on me that he is due in four weeks and I haven’t even started it!  Then I realised that I haven’t got the right wool.  I bought it on our way to the boat back in May and didn’t think that, even though the colours are right, the wool isn’t the same and it looks and feels different.  I was able to start it but have now had to put it away until I can get to Hobbycraft next week while we are home.

Sue and Andy came in for a drink in the evening – well Richard, Andy and I had wine but I was very impressed that Sue only had water!

We were going to move on today but a) the weather forecast was a bit iffy b) it was Sunday and the Napton flight would be busy and c) the only boats going passed us seemed to be hire boats and were probably going up with flight.

A nice lazy morning for me though Richard did some more work on the side deck.

In the afternoon we all walked into Braunston to go to the Craft fair in the Church.  We walked along the tow path to Bridge 98 and then on a footpath into Braunston.  It was nice to walk through fields instead of always walking the towpath.

We walked through the abandoned village of Wolfhampcote.  The village was abandoned sometime in the late 14th century and is classified as a deserted medieval village. Local legend suggests that the village was wiped out by the Black Death brought in by refugees from London, but there is no evidence to support this. It is much more likely that a few cottages still remained after the great plague and after struggling to maintain their land the villagers drifted off to more prosperous places leaving the Lord of the Manor to clear the land for sheep grazing as best he could.  Today the only remains of the village are a cottage, a farmhouse, and the old vicarage, located some distance away. The most notable surviving feature of the village is the Church of St Peter, which stands apparently in the middle of nowhere in a field. The church has been restored on several occasions, most recently in the 1970s by an organisation called the Friends of Friendless Churches. The church is today managed by the Churches Conservation Trust and is used only once or twice a year. 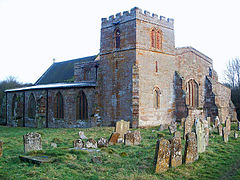 By the time we reached Braunston Church we were all very hot (the weather forecast had completely changed from 9am when I checked it to 1pm when I checked again).  The craft fair was a little disappointing but we had a nice cup of tea and a piece of cake.

On our walk back I found to course of the old Oxford Canal before it was straightened. 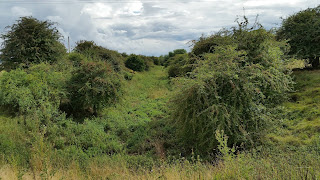 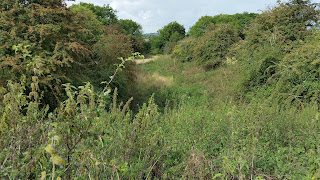 Back at the boats we sat out on the towpath and chatted - Sue produced some lovely Towpath Tapas.  Thank you Sue it was lovely.

There was an amazing sunset – my photo isn’t very good as the hedge was in the way.  I noticed that Andy and another chap were standing on the roof of their boats so I bet theirs are way better than mine! 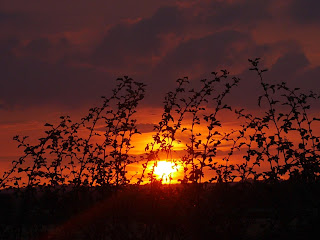 Posted by Linda Gifford-Hull at 11:39