Thank goodness the wind died down over night and the rain appeared to have stopped.

We pulled pins at 10.30am aiming for Bosworth Wharf or rather just before Bridge 42 – a journey of 25 minutes.  We were short of milk and there is a Co-op in Market Bosworth.

As we were mooring up Muffin found a new friend, Louis the Maltipoo.  He was gorgeous and such a pretty face. 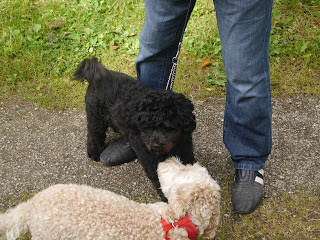 We started our trek up into Market Bosworth.  It’s about a mile and uphill – but at least it was downhill with the shopping!  The first thing we found was a cairn stone - a specially commissioned memorial to mark the dedication and sacrifice of those involved with the J.J. Churchill factory in Market Bosworth during the Second World War.  The stone honours members of the Churchill family - a Battle of Britain hero and two secret agents - as well as the commitment of staff who worked on plane engine components, a vital part of the home front war effort. 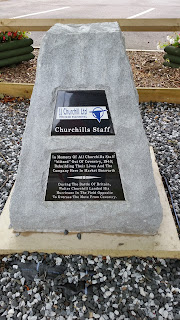 We then came across, what I thought was a bungalow with a lovely garden, it turned out to be the local fire station! 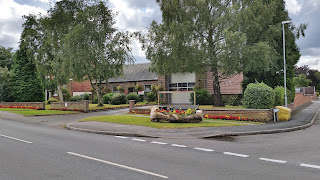 The town of Market Bosworth is very pretty.  Local building work revealed evidence of settlement on the hill since the Bronze Age. Remains of a Roman villa have also been found. Bosworth as an Anglo-Saxon village dates from the 8th century.  The Battle of Bosworth took place to south of the town in 1485 as the final battle in the Wars of the Roses between the House of Lancaster and the House of York. Following the discovery of the remains of Richard III in Leicester during 2012, on Sunday 22 March 2015 the king's funeral cortège passed through the town on its way to Leicester Cathedral for his reburial. 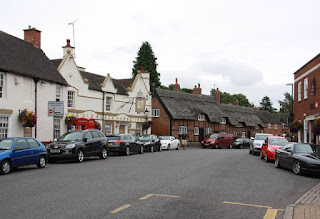 Before going shopping we went to the Red Lion for Sunday lunch.  I had lamb and Richard had beef – it was very good but it’s going to be very difficult for any pub to match up to last Sunday’s roast in Alrewas. 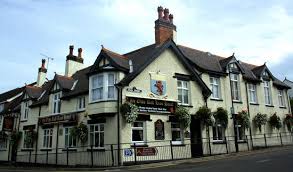 I did my bit of shopping in the Co-op.  The shop is fairly small but I got what I wanted – our next shopping will be at Tesco on the outskirts of Coventry on Wednesday.

It is a very pleasant walk from the town to the canal.  There are some very different houses, from a very old thatched cottage to a couple of very large modern detached houses behind electric gates.  We got back to the boat and moved on about 2.30pm.  Richard just seemed to keep going and going until he finally said “how about here”.  By that stage anything would do but in fact it is very nice though the wind seems to have got up again.