Richard wanted to paint the side deck that he has been working on so he pulled the boat along to a nice stretch of Armco.

I spent the morning working on last minute things I had to do for my sister’s party this coming weekend.  I’ve been amazed at how much planning I have had to do – it had better be worth it!

We stopped for lunch which was a mistake as a number of boats went passed us and caused a queue at Claydon Top Lock.  We followed a single hander down and as I was doing the locks I had to work twice as hard!  But to be fair, the chap never took it for granted that I would do anything.  We also had two single handers coming up but we still managed to get down in good time. 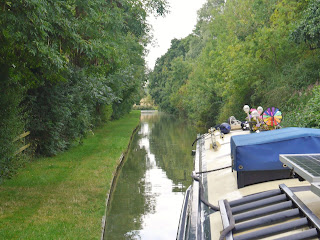 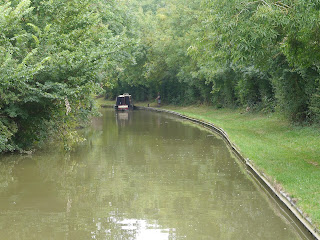 We pulled over below Claydon Bottom Lock where we had stopped last year on another hot day. Richard did some DIY and I sat out in the shade with my iPad.  I was rather surprised that we were the only boat taking advantage of such a cool spot.

Just 3 locks today before heading into Cropredy Marina.  We passed two boats that we have met before, Isobel and Hakuna Matata (not Barbara and Terry Wilson’s boat!) – it seemed strange to meet two like that.

The 3 locks were easy as there were boats coming up and we were soon turning into the huge Cropredy Marina.  We are used to Ham Manor where there are only about 40 boats – this one has berths for 249 boats. 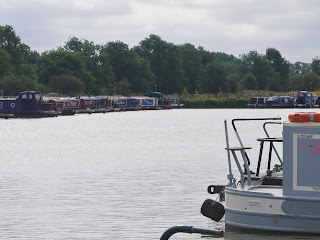 We made very welcome and have a berth nice and near the vehicle entrance where we could see the Enterprise pick up car arrive. 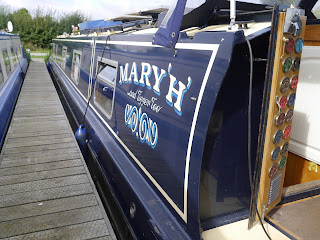 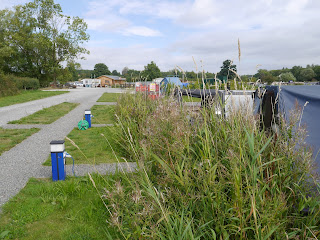 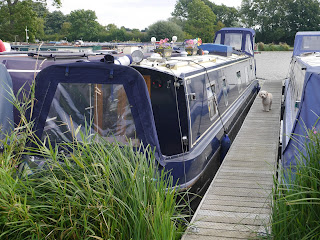 Richard got picked up on time by Enterprise and came back with a little white Toyota Yaris – just about big enough to take all our stuff.  We set off home but 20 miles later we got a flat tyre.  Richard went to the boot to get out the spare but there was no jack.  I phoned Enterprise and they put me through to the AA.  We had to wait for an hour and 20 minutes for a job which took 3 minutes!  Of course we now had a wheel which we could only do 50 mph with so Enterprise arranged for a new car at their Kidlington Airport office.  When we arrived it was a Fiat 500!  Yeah right – with all our stuff!!  Richard asked if they had a van and we ended up with a 7-seater Ford Tourneo – it’s huge!  We finally got home at 9.30pm having stopped off at Robert and Laura’s house to see how their new extension is getting on and have some dinner.

This is where we had to wait for the AA.  The A34 on one side and a slip road on the other. 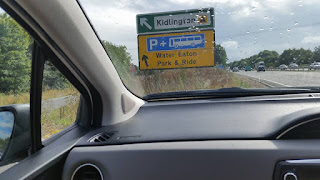 We are now off Mary H for a week and I am taking a blogging rest!  I will catch up again next week.