Brrr!  It was cold today.  On a normal January day the locals, be they Spanish or ex-pats, all walk around wearing hats, scarves, fur boots and thick coats.  Today, even us hardy Brits, felt the cold.  Goodness how the locals managed!

We drove down to Carboneras to have a proper look round.  We looked for the Tourist Information and bought a book on the area and a good map.  I also bought a very unusual pot.  It is an Amphoras de Mar piece.  These are pots which are put on the seabed just off Carboneras and left to age for 3 to 5 years using a fully natural accelerated aging process.  Each piece is unique and carries a numbered certification with a plaque accrediting its origin and a parchment with historical information about the amphora model.

I haven’t taken a photo of mine as it is all wrapped up and very fragile but this photo shows what they look like. 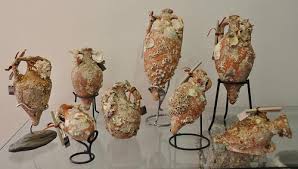 We had a coffee and then wandered into the town square where there is a castle along with the Town Hall. 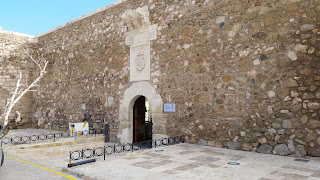 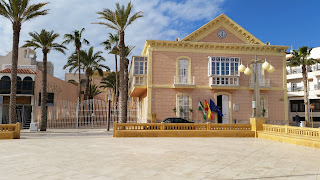 Victoria and I went round the castle – Richard stayed outside with Muffin as dogs aren’t allowed inside.  It wasn’t very impressive as it has been rebuilt so everything looked new.  There were a lot of glass doors around which we found strange. 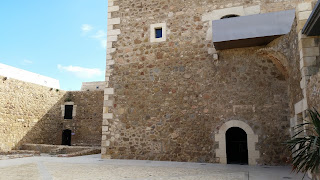 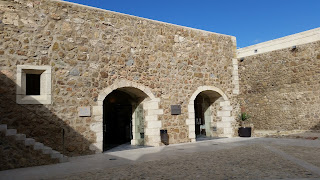 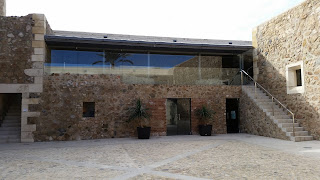 San Andrés Castle is known locally as Castillo de San Andrés.  In 1559 Philip II of Spain handed the area to the Marquis del Carpio with the mandate that he build a castle there. The Marquis however choose not to build a castle straight away but when the Berber and Barbary pirates started raiding the Andalusian coasts for goods and slaves, a string of watchtowers were built along the coast. When sighting a pirate ship the watchmen would alert the local towns; the woman and children would seek refuge and the men would rush to the coast to counter attack the pirates. Most towns however were situated too far from the coast for the men to prevent the pirates landing on the shore.  This was the main reason for the building of San Andrés Castle by Don Diego de Haro in 1577. It was garrisoned by one captain and 27 soldiers, whose families were the first inhabitants of the village of Carboneras.  In the early 20th century the castle was abandoned, at the same time the town was almost uninhabited due to economic emigration. In the mid-1970s the town began to get a new life but the castle had fallen to ruin. In the early 21st century San Andrés Castle was restored.

We found a tapas bar where we had a beer and tapas.  The waiter brought us over a piece of paper with all the different types of tapas on it and we had to choose what we wanted.  It was a good idea for us as we were able to do some translating on the phone!

After lunch we went down to Playa de los Muertos which is a lovely beach and, I believe, a nudist beach.  There weren’t any naked people on it today! 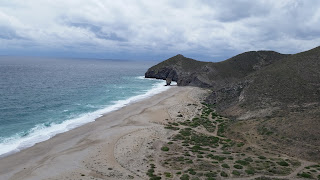 During the day I had been messaging Ingrid (keep up – they are our friends and neighbours from home) as they were on their way to see us.  They managed to take a detour but finally got to us.  Muffin was so pleased to see his friends, Hazel and Pierrot. 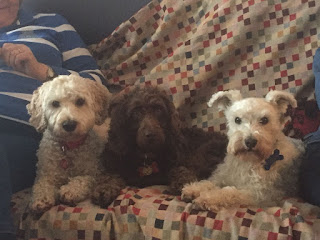 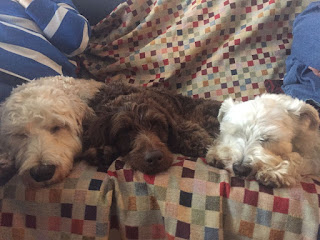 As it was cold and late they decided to leave the motorhome opposite the apartment for the night.  Victoria made a wonderful paella – it was as good, if not better than the one we had in the Spanish restaurant!  I had bought some paella seasoning in the market which really made the dish. 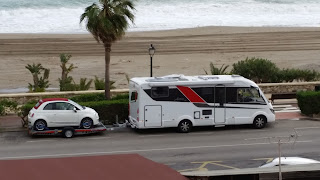 After a rather boozy evening Ingrid and Bob, with dogs, departed for their motorhome.  They were in for a noisy night!
Posted by Linda Gifford-Hull at 09:17