We are convinced that we saw a gam, herd, mob, pod, run, school, shoal, troup or flot of whales passing through the bay while we were having breakfast.  Sadly, we don’t have any binoculars but there were definite spurts of water and some black fin like objects in the water.

Richard went off to play with his friends!  Well they went off Go-Karting to be fair.  This left Victoria and I to our own devices.  We started off by going to the Parque Commercial to visit the shops.  There is a very nice gifty sort of shop that sells lovely pottery and of course I had to buy a couple of bits.  It was then back to the apartment where we dumped the car and walked up to La Cabaña for wine and tapas.  It was so hot and we had to smile when the owner, George, told us that he was going to go to the UK to get some cold weather!

We walked back along the beach and decided to go back to the apartment, grab a bottle of wine, a couple of glasses and go back to the beach so that Muffin could do some swimming.  Once we got to the beach I threw the ball into the water but Muffin didn’t see it going so didn’t follow it.  So, did we lose the ball or did one of us go in and get it?  Victoria gallantly offered to go in, so stripped off to her knickers – oh yes she did put on a spare t-shirt that I had taken – and went in.  It wasn’t very deep, for her anyway, but it seemed to spur Muffin on to go in and get his ball. 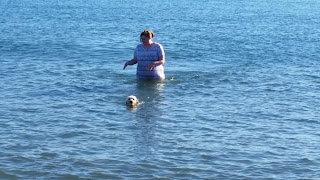 After that Muffin was backwards and forwards and seemed to love swimming with someone. 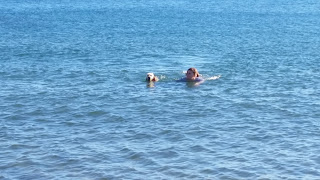 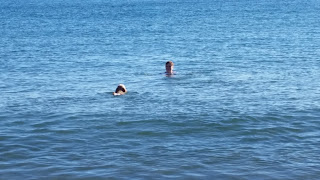 We managed to persuade Muffin that enough was enough though it did take some persuasion!  This photo is Victoria’s arty shot once she was allowed out of the water! 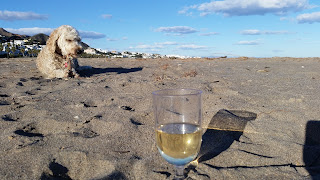 Richard came and joined us, bringing another bottle of wine and we watched the sun set behind the hills. 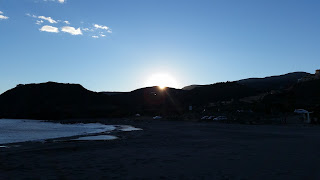 Victoria and I were supposed to be cooking a paella but for some reason, hic, we didn’t!  Richard gave up with us and took us out for dinner back to Kukis where Victoria and I had lovely chicken on skewers. 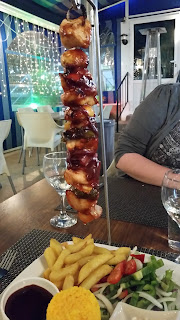 Victoria and I went to the supermarket first to stock up on wine – did someone drink it all yesterday??

It was then a visit to the Imperial Playa for a pizza.  Cathy and Martin had recommended it and said that we needed to go at lunchtime as they did half price pizzas – they also joined us for lunch.  It really is a glorious location and the pizzas were good too!  Sadly, a dark cloud came over and it got a bit chilly so we paid the bill and went across to Café Moca for coffee and cake.  As we came out of the café last week I noticed the cakes in the chilled display!  I had toffee cheesecake which was really scrummy. 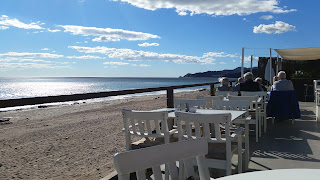 We watched the weather deteriorate through the afternoon.   This was a screen shot I took yesterday morning of Thursday’s weather forecast!  Poor Victoria :-( 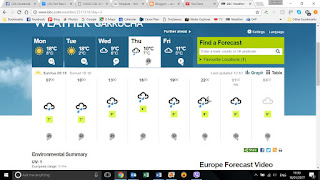 We braved the elements and went to Garrucha to see the fishing boats come in and the fish market that follows.

Before the auction we walked to the water’s edge to watch the boats coming in – it was quite choppy out there – I know I would have been sick if I had been aboard. 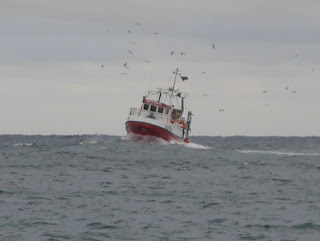 Watching over the fishing boats is a statue of a woman and a child.   We thought it might be the Madonna and Child but I can’t find any reference to it. 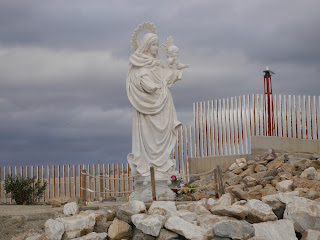 We also found a cat hiding in the rocks. 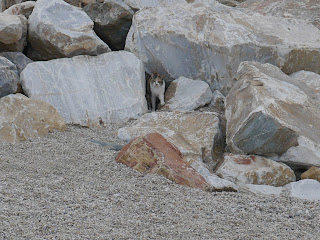 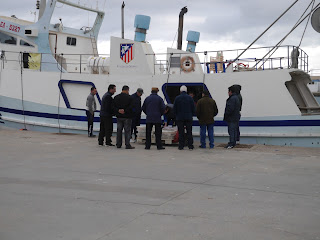 We went in to look at the auction – no-one seemed to mind tourists wandering around. 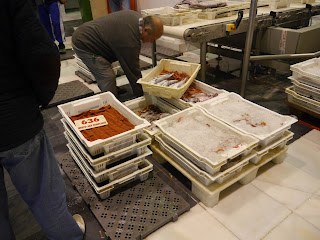 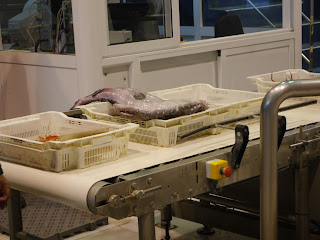 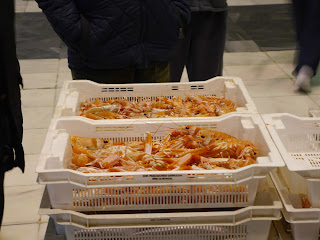 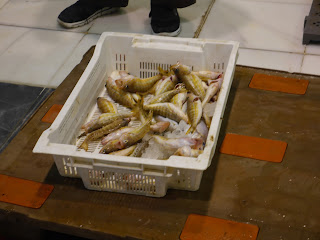 The fish go down a conveyor and stop under an overhead box which, I guess, has a camera in it.  The auction runs in reverse.  The price starts high and then comes down – pretty fast.  The buyers then press their remote at the price they want to pay.  The overhead box spews out a ticket which goes in the fish box and the box is then loaded along with the others the buyer has bought. 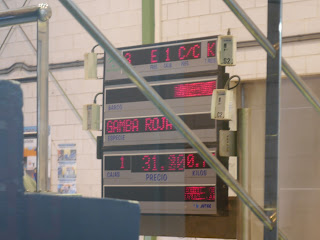 The prize catch is the Gambas Roja.  This type of prawn is considered to be one of the most delicious shellfish in the Mediterranean.  The prawn exists in small numbers. Its breeding and fishing area is very limited, and it is known as the “Garrucha prawn” because the limited fishing area is precisely just off the coast of Garrucha. 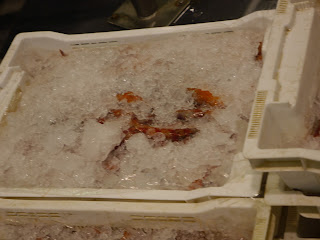 Just as I was about to leave the auction hall I noticed a commotion and an eel, which was still alive, had jumped out of its box and was on the floor. It was duly put back in its box where it made another bid for freedom before having another box put on top of it!  Sadly, I didn’t get a photo of it rearing its ugly head!

As we left Garrucha we saw one of the Gypsum ships being towed backwards into the harbour. 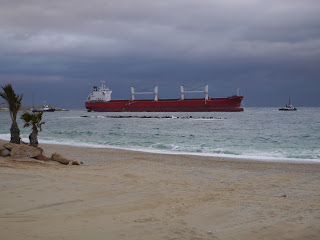 Posted by Linda Gifford-Hull at 11:50