We had the noisy night that we expected with the usual racket from the waves being louder than usual.  Also, the rain ran off the flat roof in front of us poured through a drain hole and spurted out onto the road – Spanish water torture!  (Please excuse poor quality of the photo.) 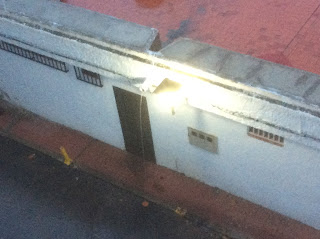 Bob and Ingrid had a much worse night than us with the noise as they also had the rain thundering down on the motor home roof.  They left us late morning to go up to Mojacar Pueblo to their campsite.

I had a lovely Facetime session with Robert and Tobyn and took these photos.

We went to La Cabana for tapas and were the only idiots to venture out in the awful weather!  We left Muffin in the car and went into the main restaurant as we knew it wasn’t going to be a day for sitting outside!  We then went mad and took a trip to Lidl in Garrucha – Victoria can’t say that we didn’t show her the sights while she was here!  In fact it was just like any old Lidl and we shan’t bother to go again!  We then called in to the Mercadonna for more wine supplies – those Spanish fairies had been at the wine bottles last night again!

In the afternoon we cut into our custard apple fruit or should I say our Chirimoya.  It is a very strange fruit with huge pips and by the time we had taken the pips out there wasn’t really much left to eat.  I’m afraid it was consigned to the bin.  Mark Twain called the cherimoya "the most delicious fruit known to men.  It is generally thought to be native to Ecuador, Colombia, Peru and Bolivia then transported to the Andes and Central America. Today, cherimoya is grown throughout South Asia, Central America, South America, California, Hawaii, southern Europe, East Africa, Kisii in particular and northern Africa.  Useless information I know but then it was raining today! 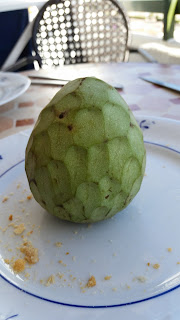 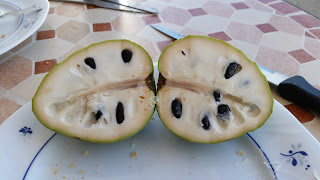 After watching a film we settled down and watched three episodes of Downton Abbey – only three more to go now and we will have finished the whole lot.

I reckon today was worse than yesterday though it wasn’t supposed to be – I think it rained all day.

Victoria and I went up to the churros café and enjoyed a churros and hot chocolate, with the rain coming in through the roof of the café! 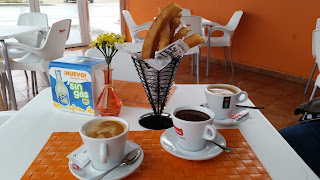 We went collected Ingrid and Bob’s and then went on to Turre.  I wanted to show everyone the market.  What market???  I reckon there were only about 15 stalls there.  I think most of the fruit and veg people were there but only one clothes stall.  We couldn’t even muster up the enthusiasm to have Indian tapas.  We called in at the bakers and then moved on to Mojacar Pueblo to, hopefully, find some lunch.  Of course we couldn’t sit outside any cafés as it was far too wet and couldn’t go in as we had the dogs.  We did find some gifty shops though.  The Pueblo looks lovely and we will definitely go back when the sun is shining. 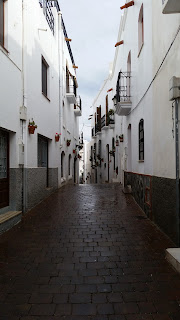 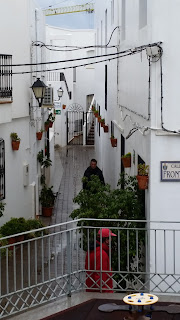 While we were in the gift shops I realised that I had left my purse in the car but when we got back it wasn’t there.  I knew that the last place I had it was in the bakers so we went back to Turre.  The people in the bakers don’t speak English so I got Google translate to translate I have lost my pink purse (!) but they hadn’t got it.  After a lot of confusion with Google we managed to find the local police station but it hadn’t been handed in.

We returned to the apartment with me feeling very sick.  I then had to cancel my Euro debit card but there wasn’t much I could do about my driving licence and fortunately, there wasn’t much money in the purse.

This photo was taken from the apartment during the afternoon. 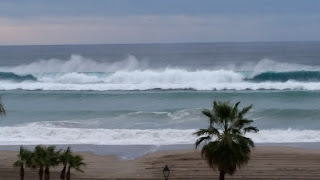 In the evening we met up with Ingrid, Bob, Sue, Andy, Roly and Bev and El Gaucho for Victoria’s last meal.  They cook genuine Argentinian steak (or so they say) on a barbecue and they were delicious.
Posted by Linda Gifford-Hull at 10:16