We woke up to the sun rising, 8.22am today with sunset at 6.01pm.  It was a Bank Holiday here and here the big supermarkets were closed as was most things.  We walked along the beach and up to see Sue and Andy’s apartment – it’s really lovely and I got apartment envy!  We sat on their terrace and had a coffee then decided to go and find somewhere to have some tapas.  We went to the Lemon Lounge which is run by Brits and we sat in the sunshine and had a drink or three and some lovely tapas.  In the photo Andy has his arm around Betty, his mother-in-law. 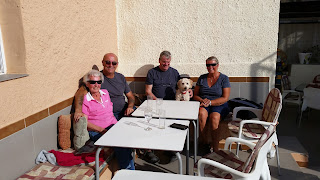 From the Lemon Lounge we walked up to the local Supermarket, Thomas’s, and then to the Euro Market which is an amazing shop that sells just about everything except food.  It was then back to the apartment and we were so full after the tapas we didn’t eat again but we did go the local pub, The Emerald Isle, where we caught up with Sue and Andy, Paul (who started the whole over-wintering in Mojacar thing!), Martin from NB Moriarty and a Canadian friend, Barry.

These two photos were taken on the beach on our way to Sue and Andy’s in the morning. 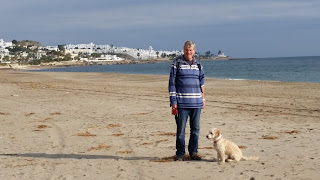 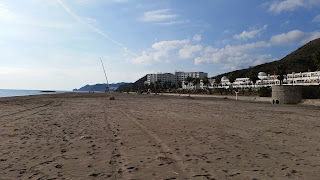 The shops were open today – yeay – so the first stop was the Mercadona with Sue and Betty where we were able to stock up on the Spanish essentials – wine was top of the list!  We dropped S & B and our shopping off and then walked back to La Cabana for another tapas lunch!  We walked back to the apartment along the beach where Muffin found a lump of wood which he wanted throwing into the sea over and over again – I really don’t know where he gets the energy from! 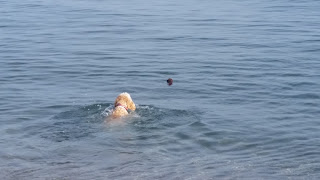 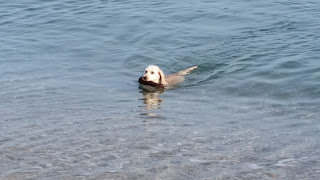 Most of the showers on the beach are switched off for the winter but we found one which we used to shower Muffin off.  The sand here seems to really cling to him. 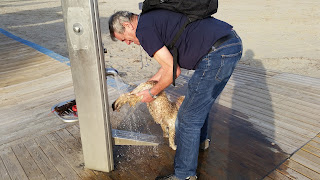 These are a few of the photos that I took on the beach of Mojacar Playa. 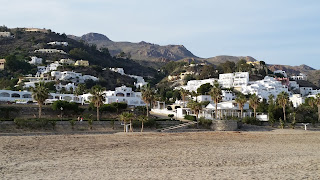 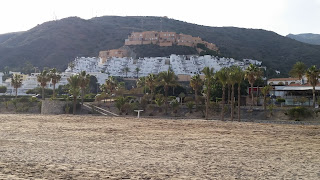 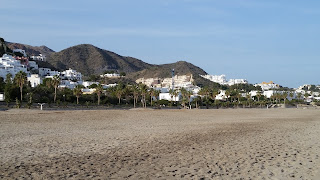 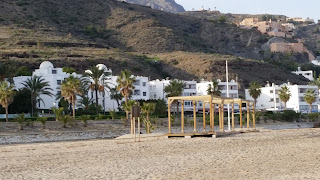 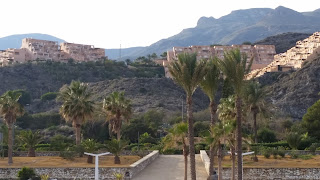 We had bought a baguette at the supermarket so had that with cheese for supper as, once again, we were full after the tapas.

We had an exciting morning!  We went to Iceland!  That’s the shop and not the country!  Iceland is in Vera which is about a 30 minute drive away.  I stocked up on a few things that I hadn’t been able to get at the Mercadona but it was really strange to see Waitrose products on the shelves! In fact everything (I think) is British including the lady at the check out!  It was then back to the apartment for lunch and a very lazy afternoon. 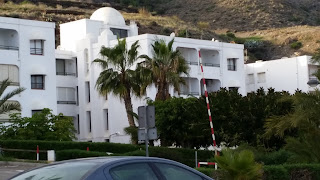 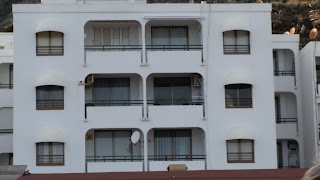 I took these photos yesterday of our apartment from the beach. We are just behind the raised barrier in the top one and the middle right in the bottom one.

In the evening we had a lovely paella as it was Paul’s niece, Hayley’s last night in Mojacar.  There were seven of us and we had two large paellas – one seafood and one mixed.  They were really nice.  We called in to the Emerald Isle on our way back and I think it was almost midnight by the time we got to bed!
Posted by Linda Gifford-Hull at 12:24