Let me start by explaining things!  Richard and I “don’t do” January.  We usually go to the Canary Islands for a week but last summer, after talking to Sue and Andy from NB Festina Lente, we decided to head to Mojacar in the south of Spain for a month.  Sue and Andy went out last January for a month and ended up staying for three!  I did a bit of soul searching about leaving my new grandson as I usually see him at least once a week and find that each time he has changed so much, so not seeing him for a month was a difficult decision to make.  But I will be Skyping with Tobyn and I’m going to get a new photo everyday and then our first stop when we get back will be for a “granny fix”!

We had had a busy Christmas with 6 people staying for the majority of the time (us included of course), 8 people + my grandson, Tobyn (3 months) on Christmas Eve and a ninth on Christmas Day. That made 9 for Christmas dinner.  By midday on Tuesday everyone had departed and it was time to say goodbye to Christmas and switch into Spanish mode!  I had spent November planning the Spanish trip so that in December I could concentrate on Christmas.  All the boxes that I had packed back in November were dug out of next door’s garage and I had a quick look through (not thoroughly enough as I found out later when we had too much of one thing and not enough of another!)  The car was packed – literally there was no room for another thing.  We only live 20 minutes away from the ferry terminal so didn’t have to leave home until 9.30pm which felt very odd but gradually the time came round and we set off. 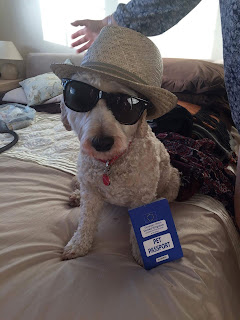 All went smoothly with check in – I had to scan Muffin’s chip which, thankfully, tied up with his passport then we sat in line waiting to board.  All the cars with dogs in were in the same queue but we didn’t realise that until the car doors opened on the ship and an assortment of dogs appeared all with muzzles on.  Poor Muffin hated his - well all the dogs did really.  We weren’t allowed to use the stairs so we all had to go up two decks in the lift which was supervised by a member of the crew.  The ship was due to sail at 11.30pm but we were tucked up in bed by then.  Thank you Brittany Ferries for Muffin’s present. 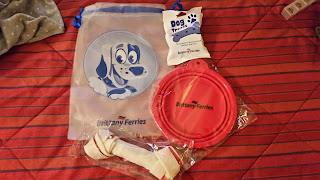 We arrived in Le Havre at 8.30am French time and set off on our way south.  The sat nav seemed to take us a strange way until we discovered that it had reset itself to “avoid motorways”!!  It quite often has a mad few minutes and resets to the map of the USA!!  I changed it and we hit the motorway.  One of new gadgets in the car is a Toll Tag which means we can go straight through the Peage without having to stop and pay.  Another new gadget is a dashcam – we learnt our lesson in the summer with our mishap on the ferry.  If we had had a dashcam there would have been no argument.

It was very foggy and there had been a heavy frost – the temperature was about -3° most of the way.  We did have a lovely sunrise though.  We stopped for a coffee and ended up having a light breakfast – we had already had a breakfast bar on the ship.  I walked Muffin round a field and nearly froze – I don’t think I have walked in that sort of temperature for a long time.  The fog stayed with us for the whole journey though the temperature did rise a bit. 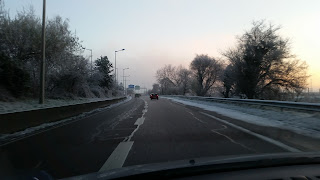 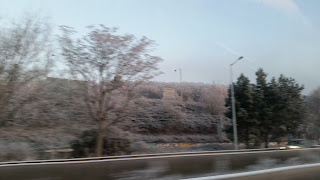 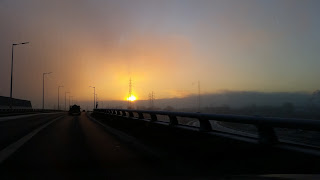 We only stopped once after that for Muffin to stretch his legs and arrived at our first hotel at Cestas (south of Bordeaux) about 4.30pm having driven 467 miles – probably about 50 miles further than we should have done thanks to the sat nav.  The hotel, or maybe I should call it a motel, was very dated and our room small with the oddest shower I have ever seen.  I thought it was for Muffin then realised it was for us!  We drove into Cestas and found a small pizza place and had, strangely enough, pizzas! 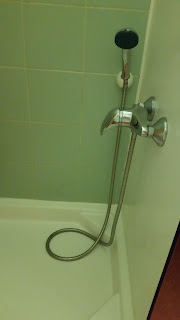 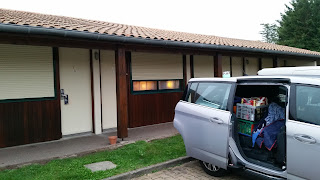 I had packed breakfasts for our journey so we had cornflakes in our room and set off at 9.30am.  We were back to the freezing fog again but once we had crossed the border into Spain the fog went and we travelled in sunshine after that.  We bought sandwiches for lunch whilst filling up with fuel and stopped in the Spanish sunshine and ate them – it was still cold though.  We arrived at our second hotel at Monreal del Campo at 3.30pm – this one was called a Hostel and is basically 12 rooms above a motorway service station.  There is nothing around it as you can see from the photos.  We had travelled 378 miles.  If you are interested the Spanish border is somewhere around 595 miles from Le Havre (remember we had done some non-motorway driving). 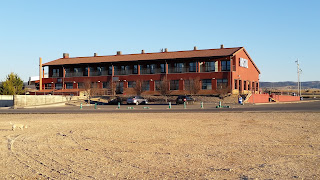 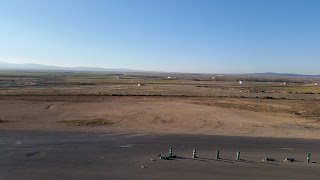 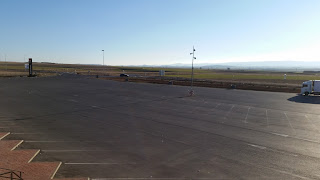 Our room was large though a little chilly until we got the heating working.  Sadly the café had stopped serving hot food about 4pm so our New Year’s Eve dinner was a baguette, crisps and a chocolate bar washed down with cheap champagne!  We were both fast asleep by midnight.

We had a very nice sunset though. 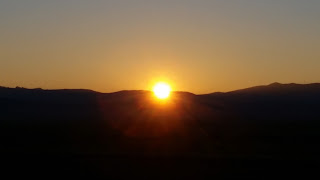 We had a breakfast bar in our room and were back on the road by 8.45am.  The motorway was empty – a Sunday and New Year’s Day when most sane people would still be tucked up in bed.  We drove a short way and stopped and finished our breakfast. 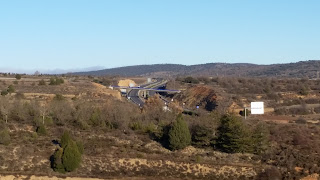 We then drove back into fog which cleared as we made our decent from 1100 metres to sea level near Valencia.  It was then a lovely drive south to Mojacar. 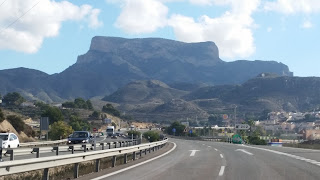 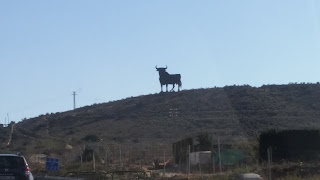 We arrived at our apartment at 3.30pm – a drive of 367 miles.  We were met by Alan and Mary who work for Blue Sea Villas who we had booked through.  They showed us round, answered a few questions and then left us to it.  The apartment look over the sea though if you stand at the balcony balustrade you will see the roof of the shops below!  But if you are sitting at the table you can only see the beach. 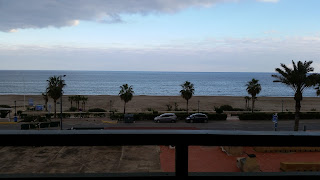 No sooner had Alan and Mary gone when Sue and Andy (Festina Lente) arrived with some essentials for us.  We sat and had a cup of tea, unpacked and went to find some food.  Hm New Year’s Day evening in Mojacar and nowhere was open.  Thankfully Sue had brought us bread and I had brought beans – so beans on toast it was :-)
Posted by Linda Gifford-Hull at 13:58