Today was a glorious day – blue sky and sunshine all day.

We followed Sue and Andy to Turre where there was a market. It is usually on a Friday but tomorrow is a Bank Holiday.  Sue said that there weren’t as many stalls as usual but I came away with some lovely fruit and a baking tray!  We had a coffee in the courtyard of a café right off the beaten track – it’s obviously only for people in the know!  We contemplated having a second coffee but Andy suggested that we went to La Garrucha, so we followed them there.

Garrucha harbour is the central point of the town and is defended by an eighteenth-century castle. It is still a working fishing town and fishing accounts for a large part of the economy. The fishing boats set off just before dawn and return in the afternoon with their catch. Garrucha is famous all over Spain for its locally caught red prawns.  At the beginning of the twentieth century there was a considerable trade in lead, silver, copper, iron, esparto grass and fruit, but now the only export from the harbour is gypsum mined in Sorbas, with a million metric tonnes being exported annually.

We went to the Rincon del Puerto, a restaurant on the harbour side where we sat in glorious sunshine and had a couple of beers and a small amount of tapas. 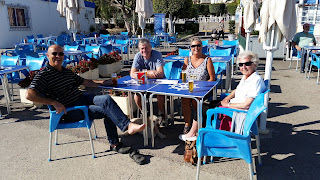 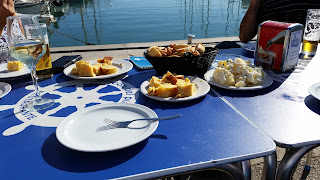 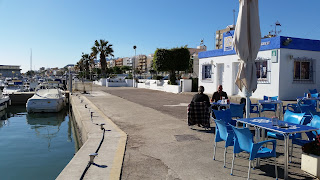 We returned to the apartment and relaxed for a while before taking Muffin onto the beach with his ball.  He loves chasing the ball and really wanted us to throw it into the sea but the waves were a little too big for him. 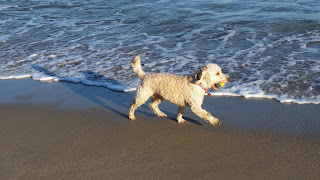 I’m ashamed to say that we had an “Eastenders Fest” in the evening catching up on the episodes we have missed – I think it was about 2½ hours in total!

Today was the Fiesta de los Reyes (Festival of the Three Kings).

There is quite a debate raging across Spain regarding whether Santa Claus is displacing the traditional Three Kings at Christmastime. The truth is that Santa Claus is becoming more and more common, but even families that sign up with “Papa Noel” usually keep their accounts with the Kings open.

And as for the Kings themselves, they continue to arrive on schedule every year in villages, towns and cities to make the annual parade (cabalgata), which usually starts at dusk on the 5th.  Melchor, Gazpar and Baltasar (the African king) are magically able to appear simultaneously throughout the whole of Spain as evening falls, and they don’t come empty handed as they dutifully toss out handfuls of sweets to the children waiting in the streets.

That same night of January 5th children are supposed to leave their shoes out to receive the gifts. However, nowadays some families are actually turning to the Christmas tree as the place to pile gifts as the Kings’ spending power grows and shoes can no longer support the weight or volume of the delivery.

Some families set up their nativity scene in such a way as to be able to move the images of the wise men closer and closer to Bethlehem over the Christmas season. The idea is to have them arrive at the stable right on the 6th.

January 6th is a very special day throughout the region as it is a day for family to come together for a special meal, exchange gift and spend time together. Nowadays, Both Christmas Day and January 6th are getting about equal celebration with the children’s gifts often divided between the two days.

These are just a couple of photos borrowed from Google. 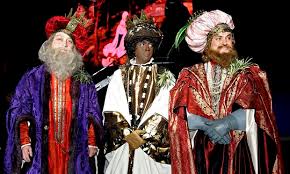 Sadly it was a really miserable day, with grey clouds and even a drop of two of rain.  The waves were quite big too (we hear the waves crashing onto the shore all the time – even when they are small.)

I’m afraid I didn’t get up until very late – but to be honest there wasn’t much to get up for and we are on “holiday” after all.

In the afternoon we went up the mountain to see Paul with his dogs Bombo and Sammie.  As a thank you we had brought some beer over for him as I know he likes his British beer.  Paul is renting a very nice villa which clings to the mountain side – silly me didn’t take any photos but maybe I will get to take some before we leave.  We had a cuppa and a chat while Sammie and Muffin played – Bombo doesn’t play! I’ve pinched this photo off Paul’s blog. 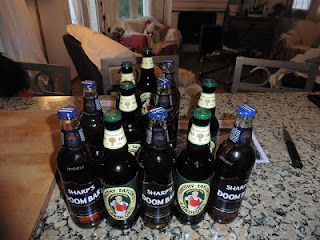 To get British TV most people have a box of tricks which works off the wi-fi but I had been trying to connect the laptop up to the TV and managed to lose FilmOn which is what we were using to get the British TV.  The instructions didn’t work so we gave in.  However Paul had said that we could watch FilmOn through the internet using a laptop, so that is what we did.

In the evening I was able to Facetime with Tobyn as he had his bath.  I felt as though I was in the bathroom with him – it was really lovely.  The only problem is that as soon as he sees a camera/phone/ipad he puts on a sombre face and won’t smile!

Posted by Linda Gifford-Hull at 18:24