Today we signed on the dotted line for an apartment for January and February 2018!  We have managed to get the very one we wanted though it is booked from March 1st but that’s fine with us.  It is in Oasis de Mar II and has a sea view, lots of outside space and TWO bathrooms!  I am really excited about it :-) 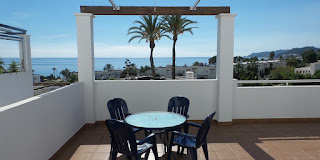 We then went caravan site exploring!  Friends and neighbours, Ingrid and Bob, are in their motorhome near Cadiz and are planning to come and visit us on their way back home.  There is a site in Mojacar but it doesn’t look brilliant and doesn’t take pets which rules it out straight away.  We looked at two south of Mojacar and at one came across a crowd of Brits who go there every year to get away from the British winters.  They were all sitting drinking wine under a fluorescent light which read BAR – this was attached to the back of a motorhome!

It was then north of Mojacar to look at three more.  The first one at Vera is split into two – textile and nudist!  We took the scenic route to the third one.  I was using Google Maps to direct us and I kept changing the route making it longer and longer – it is quite a clever system if you want to go the long way round.  However, one road petered out on us so we had to turn back!  The site at Los Gallardos was OK but it does appear at all these sites that everyone is very much on top of each other.  The last site was just out Mojacar Pueblo and the best of the five.  I have made my report so will now have to wait and see what Ingrid and Bob decide to do.

We passed through a huge vegetable/fruit growing area and were amazed at how the volcanic area has been cultivated.  This is a very big orange and lemon growing area and I had a real yearning to pick an orange off a bush but Richard wouldn’t let me – said he didn’t fancy visiting me in a Spanish jail!!

We saw a large hill with a white building on top 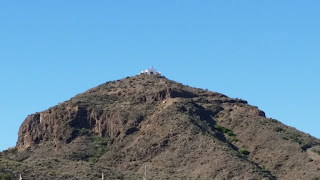 On investigation, I found out that it was a volcano, the Cabezo Maria which emitted several lava flows through the Vera basin.  It would appear that this happened during the late Miocine period – in other words 23.03 to 5.333 million years ago.  Richard reckons we don’t have to worry about it erupting again!  The little building on the top is a shrine and local legend says that there’s been a shrine up there since the early 15th century, when the conquering Christians went about putting up crosses and churches on any high point. An ancient shrine was certainly there in the 19th century, and was partially rebuilt by locals in the 1930’s, but it then fell into disrepair.  Apparently, there is an audioguide which you can listen to on your phone as you walk up the hill and this says that Manuel, a local shepherd married to one Maria Toribia, used to graze his sheep up there, until on the 12th of August 1427 he saw a vision of the Virgin Mary. This started the tradition of the annual pilgrimage from the village to the hill and lead to the building of the first shrine in 1507.

We returned to Mojacar and then walked up to La Cabana to meet Sue, Andy, Wendie and Barry for tapas.  It was really quite hot and I felt overdressed in a blouse.  There were even people sunbathing on the beach.

Friday is market day in Turre.  We took ourselves off and wandered up through the market and then I did my shopping on the way back.  Mainly fruit but also some paella seasoning and shoes for Richard.

We met up with the rest of the gang at an Indian Tapas bar.  Anyone who knows me will know that I don’t eat Indian food as it doesn’t agree with me.  I tried to ask for a rice tapas but the guy didn’t understand me.  However, he suggested that I have chicken masala which I did and enjoyed.  I did have a slightly odd tummy but that’s all – I will try again next week.  The gang is getting bigger especially as Paul has his brother and niece staying at present.  (Thank you Andy for the loan of your photo). 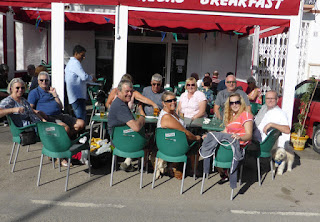 We returned to the apartment for the siesta before taking Muffin for his daily ball throwing expedition on the beach.  It was really lovely and I had a paddle - the water was rather cold at first but after a while it was quite warm. 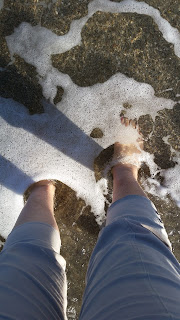 Posted by Linda Gifford-Hull at 09:30