We are definitely coming back to Mojacar next year so have decided to find our apartment now.  The one we are in is OK but the balcony is very small and even though we have a lovely sea view the sun goes off us about midday and the apartment is very dark and can be chilly.  So today we started our search.  We would like 2 bedrooms, maybe 2 bathrooms but not necessary, large outdoor space which gets the sun most of the day (nowhere really gets it after 4pm here) and of course dog friendly. 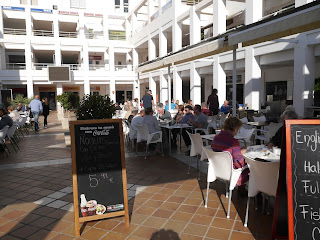 We went up to the Parque Commercial where we had lunch and then went across to visit Coastal Properties.  The girl in there suggested Oasis del Mar which we rather discounted straight away.  We then went to two more agents with the last one taking us to see two apartments.  The first one was lovely and we would have been more than happy to have stayed there but it didn’t have an oven – only a hob, which is crazy!  The second apartment wasn’t for us but it did get us interested in the development which was Oasis del Mar!  It was then back to the apartment to mull over what we had seen.

We were up VERY early today – 7.30am.  Betty was flying home and Sue was accompanying her so 12 of us met for breakfast at Cafe Moca, which is run by Brits, so we had a good old English breakfast :-)  It also gave us a chance to say hello to Roly and Bev who had arrived yesterday.  If you are a regular blog reader you will know that we met them last year and did the River Wey with them and Sue & Andy.

The best part of our early morning was the sunrise – it was amazing. 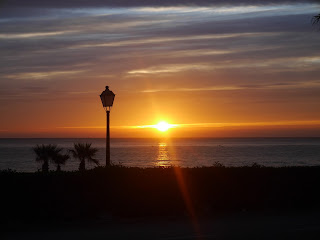 We said goodbye to Betty and au revoir to Sue and then we started our apartment search again – bring on Escape to the Winter Sun!! There are lots of apartment agencies and each one has its own apartments – none are duplicated.  We had arranged with Roly and Bev to meet them at La Cabana for tapas along with “home alone” Andy!  We met up with Andy but Roly and Bev never made it!  Still the tapas was good.

We were both tired and on our return to the apartment Richard fell asleep whilst reading his book so I went and laid on the bed and before I knew where I was it was an hour later!

Muffin always comes up on our bed while we are having our “early” morning tea and he rather blends in with the sheets!
We had arranged with Coastal Properties to view a couple of apartments in Oasis del Mar II.  There are two Oasis developments – I and II, with II being slightly newer.  However, the apartments in both blocks are almost the same – seen one seen ‘em all!

I had done a lot of online research and found that Coastal Properties had number 32 on their books which looked absolutely perfect.  Sadly, it was occupied so we couldn’t view it but we had a look at the outside aspect and it looked perfect.

We walked across to the Lemon Lounge where we had a coffee and mulled things over.  (I do love the café con leche in Spain.)
I chased up a couple of the agents who hadn’t responded to us and then did a further online search and came up with another perfect apartment but this was an internet booking.  I emailed the owner immediately asking if the apartment was vacant for next year and how much it would be.  Finally, during the evening, I got a reply asking if I was muddled as I was asking for January 6th and it was already January 11th!  Daft chap didn’t look at the year and said that the cost would be 50% of the online price.  As the online price didn’t mention the winter and mid term lets I replied asking – it’s 3pm on the 13th and he still hasn’t replied!

In the evening 7 of us went to a very nice restaurant called Sensations.  They do a menu del dia (menu of the day) for €12. The food was excellent for the price and a good time was had by all.
Posted by Linda Gifford-Hull at 14:11