We were back to lovely sunshine today.  I love lying in bed with the sun streaming in and the roar of the waves on the beach :-)

Richard and I popped up to the Mercadona as last time I had bought some really nice sparkling wine and we wanted to get some more.  I was shocked to find that it cost all of €1.85!  I think every square inch of room in the car on the way back with be packed with it!  I also bought some Spanish cheese which we had a lovely fresh baguette for lunch.

In the afternoon we drove towards Carboneras which is south of Mojacar.  I hadn’t ventured right out of the apartment – only left!  Our first stop was at Macenas Beach where there is a castle, a military construction built in the 18th century to watch over the coast. 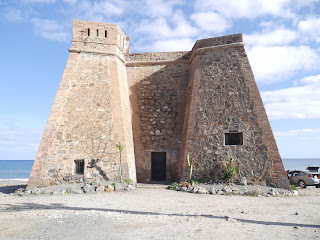 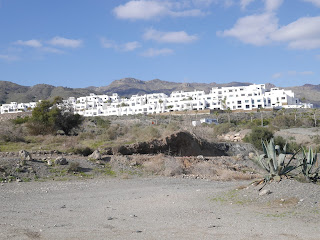 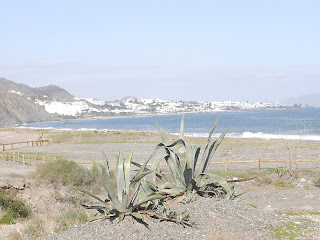 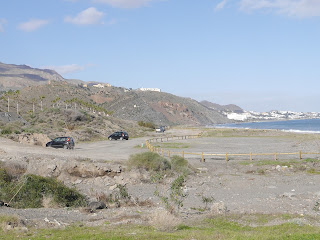 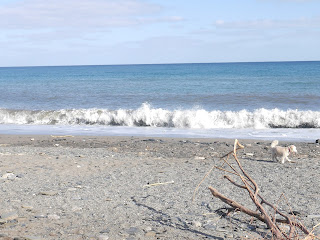 We then drove on Carboneras.  We both imagined a small fishing village but in fact it is a big town with not much to see – or so we thought.  On doing some research for the blog I’ve discovered that there is a lot of history so we will be going back to do some proper exploring.  The name Carboneras, actually translates to coal bunkers, as the whole area was stripped of its forest and used for coal. The region is now dry and arid, but contrasts beautifully with the blue Mediterranean Sea. The town now thrives on both fishing and tourism.

We drove back the long way along the motorway which cuts through the mountains.  I really must make an effort to take more photos!  We passed Café Blu which serves ice-cream so decided to give it a try.  The ice-cream was very nice but there wasn’t much choice yet as they haven’t been open long after a winter break.  They are very dog friendly there.

In the evening we met up with Sue, Andy and Betty and went to Al Punto, an excellent steak restaurant.  We all had rib eye steaks but most people were on the “all you can eat” deal – we might have a go at this before we go home!  The food was excellent and service very good.  The restaurant is very close to the Emerald Isle so we just had to go in there for a nightcap.  I had two Baileys – I believe they pour the spirits out for 5 seconds and it’s amazing how much you get in that short time!

Another glorious day.  On Sundays there is a market at Villaricos – a short way north of Mojacar so we followed Sue and Andy.  Sue and I left the men and Betty at a café and wandered to the market.  There were masses of stalls both edible and non edible!  Sue bought Betty a couple of scarves and I bought a bum bag and a purse.  In the edible section I bought fruit and some veg and then we both bought a rotisserie chicken for dinner.  We joined the men for a drink and then drove back to Mojacar. 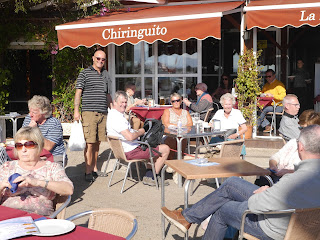 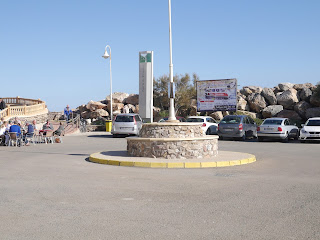 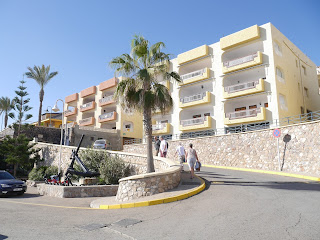 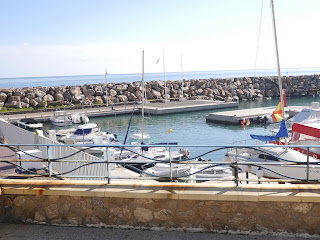 We stopped at Puerto Madero for tapas and were joined by Wendie and Barry along with Max.  The tapas was only small but very nice.  It was then back to the apartment for a snooze before having our chicken with some roast potatoes.
Posted by Linda Gifford-Hull at 17:46