We woke up to sunshine which was streaming into our room.  We had our breakfast and set off about 9.30am. We had a quickly nosey at the beach which looked lovely.

We were soon back on the motorway and watching the miles disappear.  We were listening to The World According to Bob (the sequel to A Street Cat Named Bob) and I was busy crocheting too.  It was a fascinating journey with some of the mountains jagged, others smooth and the distant ones covered in snow.  The crops were now olive and almond trees with the odd orange tree thrown in for good luck.  On the other side of the road we could see the snow topped mountains of the Pyrenees. 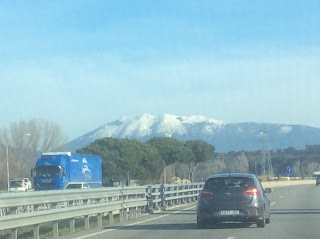 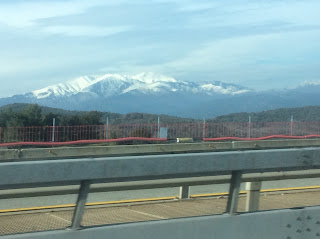 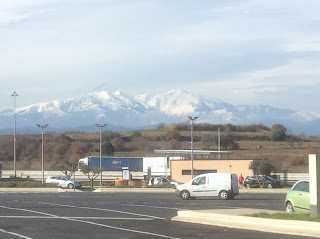 Signs for the French border started to appear and before we knew where we were it was goodbye Spain and hello France.  We stopped at an Aire to buy a sandwich and I so nearly said "hola" to the woman at the cash desk! 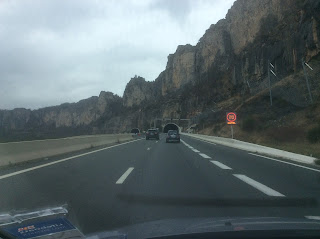 The scenery was lovely all the way until we went into a long tunnel at the end of what looked like a huge gorge - as we came out the weather changed and from then on we didn't really see anything.  I had been so looking forward to going over the magnificent MillauViaduct but it was raining so hard and was also very misty so we couldn't really see anything.  The viaduct holds the world record for the tallest bridge, culminating at 343 metres (higher than the Eiffel tower), 2460 metres long and touching the bottom of the Tarn valley in only 9 places. 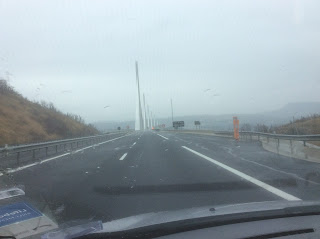 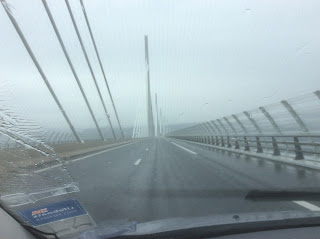 The rotten weather was with us all the way to Clermont-Ferrand where our hotel for the night was.  Richard had to negotiate the Clermont-Fernand roads in the rain, in the dark, in the rush hour and on the wrong side of the road - he only swore once!

We stayed at the Campanile Hotel or at least one of three in the area.  It was the most expensive hotel of the trip at €79.  It was very nice and had a lovely bathroom but it wasn't worth the money.  I guess it was because the hotel is in the town - we will stay out of town next year.

We couldn't decide whether to eat in the restaurant and put Muffin in the car with the risk of him complaining or whether to get a takeaway.  We chose the latter and set off to find a McDonalds I had seen on our way in.  By this stage the rain was bucketing down and we got soaked just going into the restaurant.  Muffin appeared to be quiet so we ate our burgers in the restaurant.

We watched another film back in our room and drank the last of the Baileys.

The rain had finally stopped when we peered out of the window this morning.  We packed up ate our instant porridge and set off - it was only 8.30am.

As we left Clermont-Ferrand we saw this electric car charging centre – I wonder if we have anything like this in the UK. 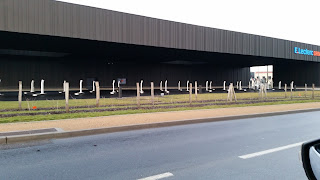 The scenery was pretty boring so I concentrated on my crochet and got on a lot quicker than trying to do that and look out of the window at the same time.

The satnav wanted to take us too close to Paris for Richard's liking so we took a slightly longer route round Chartres and Rouen.  Chartres was a nightmare.  The road was a ring round the city/town and consisted of more roundabouts than road or so it seemed - eat your heart out Milton Keynes!  It will Paris next year.

We stopped for a sandwich - we had hoped for a proper meal but of course the Aire we stopped at didn't have a restaurant.

We soon started to see signs for Le Havre and a black cloud settled over my head.  Our lovely month in Spain, that I had so lovingly planned for, was over and we were going back to grey, wet England.  I realised that I had sometimes moaned about the weather in Mojacar when I really shouldn't have done so.

We crossed the Seine over the Tancarville Bridge.  The bridge was completed in 1959 at a cost of 9 billion francs. 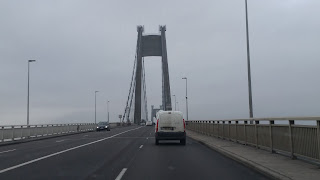 We got to the ferry port about 2 hours early - the check-in wasn't even open!  However, we didn't have to wait long before we were through and queuing up to get on the ship. We were the only car in the "dog" lane and in fact there were only 12 cars going on the ferry though there were about 40 to 50 lorries.

We settled down in our cabin but there was no doggie bag and I was just thinking that an email to a Brittany Ferries was in order when there was a knock on the door and a lovely Frenchman said that he had a gift for ze dog :-)

The crossing was a bit choppy but I didn’t feel sick though I knew if I moved I might do!  It didn’t really seem to be too long and before we knew where we were we were we reversing into our dock.  With only 12 cars onboard we were soon off loaded and on our way home.  The great thing about living so close to Portsmouth we were home in 20 minutes!

We had travelled 359 miles today.  A total of 1212 miles.  Now the strange part of this is that that is the exactly the same mileage as going down to Mojacar but we did two very different journeys!  Our total mileage for the month was 3277.

We had a wonderful time in Mojacar and are really looking forward to our return in January 2018 – however we have a full summer of canal cruising in front of us plus a different kind of cruise in May but you will have to log into the blog in the early summer for more details!
Posted by Linda Gifford-Hull at 12:03