The wind has dropped at long last, the sky was blue and the sun shining.  I was actually just in my t-shirt until we got underway.

At Cookham Bridge this house doesn’t look any different to last year. There are no signs of habitation.  The only thing I can find out is that it is called Tudor Lea. 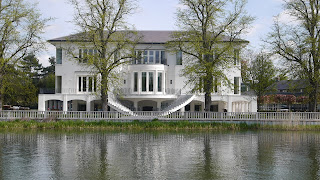 Coming out of Cookham Lock and into the Cliveden Reach I managed to take this photo of Clarence (which I think is quite good!) 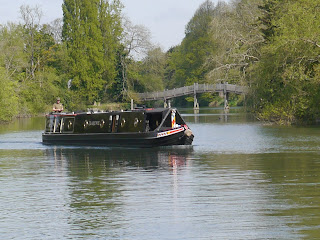 Down Cliveden Reach where Cliveden House slowly comes into view.  I have actually stayed at Cliveden House.  Many moons ago I was the Membership Secretary for the Master Chefs of Great Britain and I organised a Gourmet Dinner there and was given complimentary accommodation – it was pretty amazing. 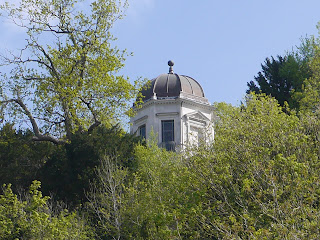 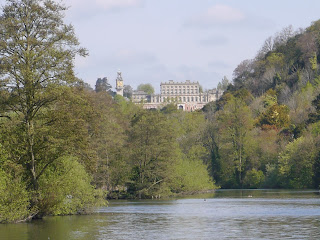 Just before Maidenhead Bridge we came across a Berkeley Homes development.  It would appear that they are building on the whole island. 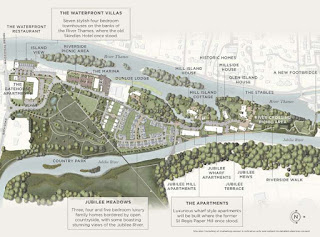 These apartments are just one phase.  Berkeley Homes say “The first release of luxury 2 bedroom apartments and 2 and 3 bedroom penthouses, Jubilee Mill is situated in an enviable location bordering the Jubilee River and beautiful green spaces and parkland. Enjoy superbly appointed homes boasting some of the best of modern living in the area, many featuring a private balcony or terrace.”  Price tag - £650,000 – £1,300,000!  There are also some 3, 4 and 5 bedroomed houses which have a price tag of £1,110,000 – £2,165,000.  Guess I won’t be living there then! 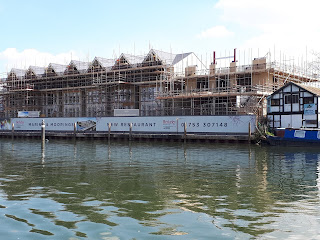 Bray Lock and Boveney Lock and then into Windsor.  We weren’t too worried about mooring as everywhere else has been so quiet.  Baths Island was empty so we moored up there.  I didn’t know it was called Baths Island until today but in fact it used to be called Deadwater Ait.  Apparently from perhaps as early as the 1840s, this was an area where Windsorians used to swim in the river and Victorian maps show it as Windsor Swimming Baths.  1870 the men's bathing area was moved downstream to a point adjacent to the island now known as Jacob's Island as Queen Victoria had complained about the sight of men bathing so close to the public railway line. This new swimming area was known as the Eastern Baths. It was not until 1904 that the area by the arches was officially used as a swimming area once more when the Ladies Swimming Baths were constructed, later known as the Western Baths.

We wandered into town to get fruit and veg from Waitrose and then returned to the boat.  In the evening we went to the Two Brewers in Park Street for dinner.  We had gone there last year with Festina Lente and Klara but they were fully booked for dinner so this time I booked beforehand.  It’s a wonderful old pub which serves excellent food.  I had tiger prawns and scallops as a starter which was amazing, followed by filet steak.  There was a slight hiccup with my steak which was immediately put right and they took 50% off the price of it too.  (Muffin now has a piece of filet steak for dinner tonight!)  For pudding I had salted caramel cheesecake which was to die for.  The meal was not cheap but worth every penny 😊