Since coming down through Henley two weeks ago things have moved on with the Henley Regatta.  Marquees are now up and the skeletons of seating are erected. Even yesterday a man was putting a tap in near us. 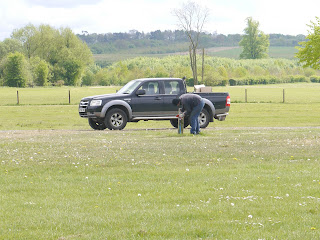 Henley was pretty empty and we chose our spot.  There was soon a beep-beep and we were joined by Doug and James on Chance.  Travelling with them are Neil and Pauline on Waterlily.  It’s a rather sad meeting as Chance is for sale and this is their last cruise.  However they don’t live far from us so hopefully we will catch up with them again when we are all at home – easier said than done though!!

We had drinks onboard Chance.  We hadn’t been onboard before and she is a lovely boat – someone somewhere will be buying a real treasure.  A fair amount of wine was drunk and James, Doug and I all slept all afternoon (Not together of course!)  Richard, however, was going to paint the roof but we were under a tree and its bits spoilt the venture!

We all went for dinner at the Angel on Henley Bridge.  We had planned on sitting outside but it is a very dog friendly place and Muffin was allowed in the dining room.  The food was OK but the company was fantastic!! 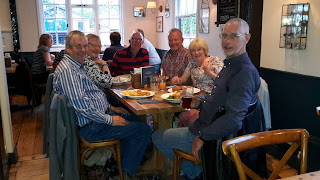 I had noticed during the afternoon that there were a lot of runners or walkers with numbers on.  It was the Thames Path 100.  The annual race, now in its 6th year, is a 100 mile continuous trail race along the Thames Path from Richmond in Surrey to the centre of Oxford.  The race started at 10am this morning and the cut off time in Oxford is 2pm tomorrow.  Henley is about half way.  As we were coming back from dinner there were still participants coming past – most with head torches on.  Henley was one of the 13 Aid Stations where drinks and hot food were being served.  Last year’s winners were Craig Holgate (men’s race) in 14 hours and 9 minutes and Samantha Amend (ladies race) in 16 hours.  The entrant limit for this year’s race – I wonder how many actually finish.