I took this photo last night of Marlow Church just as we were going to bed. 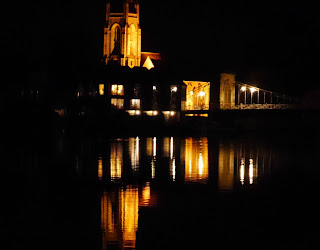 We needed to walk into town this morning.  I needed a new battery for my watch, Richard needed coax connectors and I needed to go to the Post Office.

Long story – so here goes!!  I got a new mobile phone just before we left home and discovered that it doesn’t use the same cable as my old one.  As we have charging cables all over the place I ordered some new ones.  They arrived just as we were leaving home but they were the wrong ones.  I ordered some more to be delivered to Barbara in Shepperton but, guess what, they were wrong too!!  My son, daughter-in-law and gorgeous grandson are coming to visit next week so I asked Laura if I could get some new cables sent to them from Amazon.  She said yes but get them delivered to their local Amazon locker as it is easier in case they are out.  I duly did this.  This got me thinking!!  I use a small clip-on light to read by at night so that I don’t disturb Richard but it is flickering and annoying!  So I ordered a new one from Amazon and got it delivered to the Post Office in Marlow.  Our visit to the Post Office this morning was to return three packages to Amazon and pick up the new one – this all worked perfectly.  I now have a nice new light and during the afternoon I got three emails from Amazon to say that as my packages were on their way back they were making an advanced refund!!  Great service Amazon.  I wonder if one day we will get our packages delivered by drone when we are moored up in the middle of nowhere!  Oh and we didn’t get the battery or the connectors!

We had a Costa coffee in the park and then sallied forth up the river.  Temple Lock was on self-service (of course).  Someone had left the top gates open and the sluices up – how lazy can you get ☹.  Also, left neatly by the Lock Keepers office was a take-away coffee cup and a bag of dog poo!  I just hope the two instances were not connected. 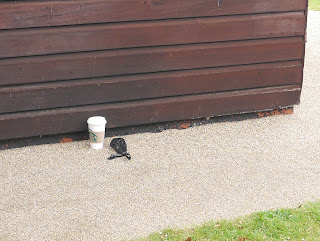 Hurley Lock was manned as was Hambledon Lock.

We pulled over at Remenham Farm Moorings again.  It was a lovely afternoon and Richard did more work on the roof and even I got out with a cloth to clean the gullies above the windows!

We are moored opposite Greenlands.  This is one of the campuses for the Henley Business School, part of the University of Reading.  I wouldn’t mind studying there!  Greenlands was built in the 19th century and has been a Grade II Listed Building since 1992. 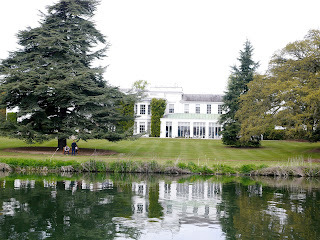 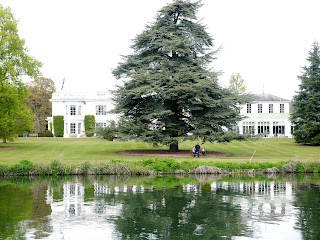 The present building was built on the site of a previous then Edward Marjoribanks a senior partner in Coutts Banks, bought the house in 1852, enlarged it and it was sold in 1868 on his death.  It was bought by William Henry Smith, son of the founder of W H Smith.  He further extended the building, though its appearance received a cool reception from Jerome K. Jerome who joked in Three Men in a Boat that it was ‘the rather uninteresting-looking river residence of my newsagent.’ On Smith’s death, his family was ennobled with the title of Viscount Hambleden. Greenlands remained their home until immediately after the Second World War.  In 1946, the 3rd Viscount rented the building to the Administrative Staff College, an initiative designed to provide management education to British men and women in all sectors of the economy and government. The Smith family moved into the village of Hambleden. Meanwhile, the Administrative Staff College opened its doors to course members in March 1948. In 1952, following the death of Viscount Hambleden, the house was bought by the College. The Administrative Staff College was renamed Henley Management College in 1991, when it received its Royal Charter. In 2008 it merged with the Business School of the University of Reading, to form the new Henley Business School.  (This is all from Wikipedia.  I was going to edit it but it all looked interesting so I have left it as it was.)