We had a noisy night with the geese making a hell of a racket!  Quite what was going on I can’t begin to guess.

The other side of Marsh Lock are two lovely houses.  The first one has had a modern extension built into the cliff and the second one, I think, is new. 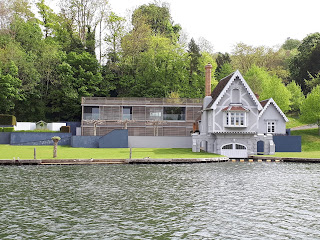 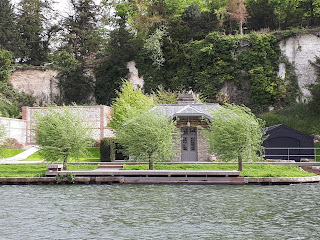 Up through Shiplake Lock which we shared with two other narrowboats – this in itself is unusual as we have had most locks to ourselves over the past few weeks.  We dumped the dumpables and topped the water up and then cruised up to where we stayed two weeks ago.

It was a very cold afternoon so we didn’t do very much.  I have been trying to publish the blog from a Word document for sometime but it won’t work.  So I took the time to have online chats with THREE Microsoft technicians but it still won’t work.  It’s not a major problem but it would be nice to be able to do it.

Now to see how many people who already blog read my blog!  I am looking for an offline blog editor which I can use on my iPad.  I downloaded Blogo last night but I don’t like it.  Has anyone got any tried and tested ones?

We watched two hours of Line of Duty as we missed last Sunday’s episode.  I’m not really confused about the ending – honestly!