A lovely morning which made our mooring look so much nicer than it did in the rain.

We cruised back up to Evesham, topped up with water (four people on a boat do use a lot of water) and moored up.

We are moored at Workman Gardens where there is a replica of Evesham’s famous whalebone arch was put up in 2013.  The new arch stands in the same spot as the original whalebone arch did for more than a century, up until last year, when due to years of weathering and flooding, they were too frail to remain in place.  The original bones arrived in Evesham in 1819 when a former Evesham man, Mr Stanton, set sail on board the Andrew Marvell. Leaving from Hull under Captain Orton, the crew were embarking upon a whaling voyage to the Arctic.  Ten whales were caught and the jawbones of one of the animals caught – a bowhead whale – was sent by Mr Stanton to his friend Dr Cooper, who lived at the Mansion House, as a gift.  They were originally erected as an arch at the entrance to the Mansion House.  In 1906 they were presented to the then borough council by Dr Cooper’s grand-daughter Mrs Frances Edwards and remained in place for 106 years. 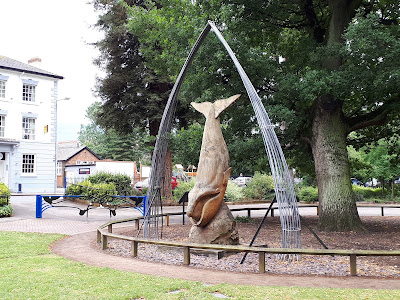 The main bridge over the river in Evesham is Workmans Bridge.  It was erected in 1856, under the auspices of Henry Workman, long-time mayor of Evesham. At the same time as building the bridge, the River Avon was dredged, and the sediment was used to create Workman Gardens. 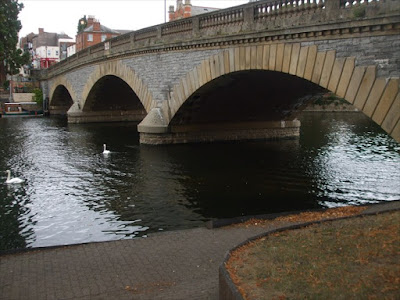 After lunch we all took Muffin for a walk and stopped for ice-creams.  Muffin almost lost his ball in the river but a nice lady with an oar (we were outside the rowing club) hoiked it out for him.

In the park is a wooden statue, The Penny Whistle.  The sculpture was placed in Abbey Park in 2007 at the start of the 2007 Evesham Music Festival. Unfortunately later that year, the River Avon flooded. The sculpture floated off downstream. It has now been replaced and concreted in to avoid a repeat. 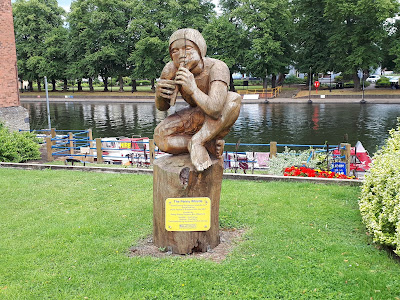 James collected his car and took me Morrisons to buy some heavy things before he and Maisa headed home.  We have had a lovely weekend with them but the weather could have been kinder.  I’m really cross with myself as I forgot to take a photo of the two of them.

We spent the rest of the afternoon and evening relaxing.  We love having visitors but it is also nice to have the boat back to normal!