It was a very misty morning, but it soon burnt off to reveal a lovely sunny day.  We needed to decide what we were going to do as we have to go home on Tuesday and need to be at Hillmorton on Monday to see a couple of boat painters.  So, three nights, but where?  Maps, books and CanalPlanAC were poured over and eventually we made a decision!!  As it was going to hot again today we decided to just do a few miles and stop at Bridge 7 where we stopped on the way up and I could watch the lambs again.

We pulled over at Spinney Bank Farm shop (Bridge 23) – one of the best farm shops on the canals and I stocked up the freezer with the most amazing looking meat.

After lunch we headed off south-westwards.  I decided to do the small amount of ironing which I had got.  At home I always iron whilst watching the TV, but I can’t do that on the boat as I have to iron while are moving and the engine is running so quite often I will put music on – rather loud!!  So, if you ever see a navy blue (well Flag Blue) boat with loud music blaring out and a crazy woman jigging around whist ironing – give it a wide berth!!!

We wanted to stop at the same place as we stopped on the way up – opposite the lamb field.  It was such a lovely afternoon, so I lay on the bed and watched our progress from there (we are reverse layout).  I don’t like sitting in the sun, so it’s a wonderful way of travelling!  There was one boat on our “mooring” so we pulled in behind it.  I was soon sitting out on the towpath with my book while Richard did a few jobs on the boat before joining me. 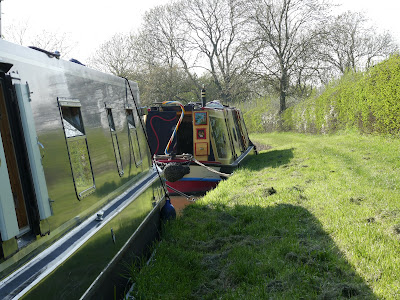 The lambs had me in stitches later as they were playing right opposite the boat.  There were five of them and they were playing at “who can butt the hardest!”  The smallest lamb wasn’t joining in, but I don’t blame it – the others were quite a bit bigger.  Sadly, the photo doesn’t show the little lamb, but you can see two having a go and the other two eyeing each other up! 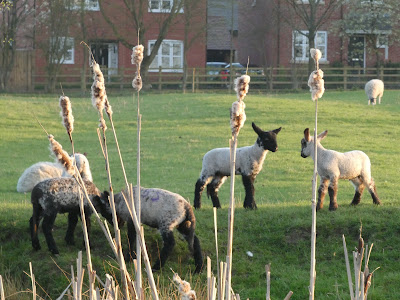