We had promised ourselves a Sunday lunch and settled on Kukis - a restaurant run by an English couple.  We went for Sunday lunch last year which had been excellent and today’s roast beef was as good as last time.  Phil and Liz came with us and we had a very enjoyable time. 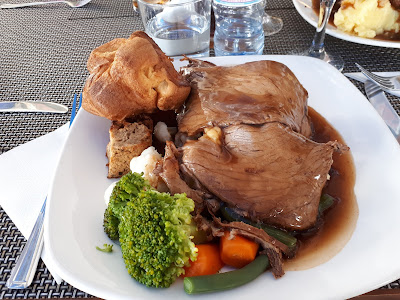 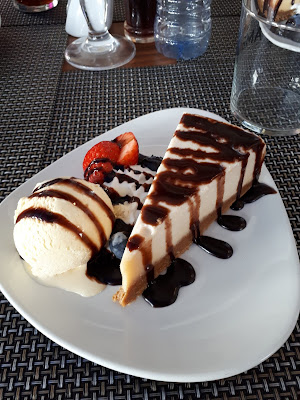 After a brisk walk back to the apartment we sat outside and read.  We looked up at one stage and saw this rainbow over the sea - there was no rain here! 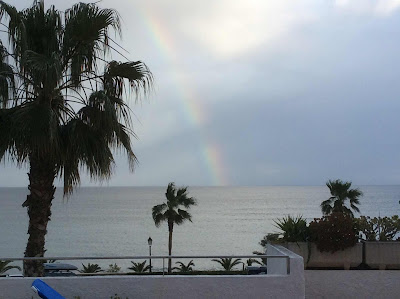 Monday was a busy day catching up with the things we hadn't got round to doing.  I wanted to the Parque Commerical to get a couple of things from a gift shop there.  We stopped and had a coke and were going to have a snack but we were bought all sorts of edible things as a type of free tapas - result!

It was then up to Mojacar Pueblo for a wander round.  We went twice last year but both times the weather was pretty grotty - this time it was a glorious day.  Our first stop was the viewing platform which was being built last year.  The views are fantastic. 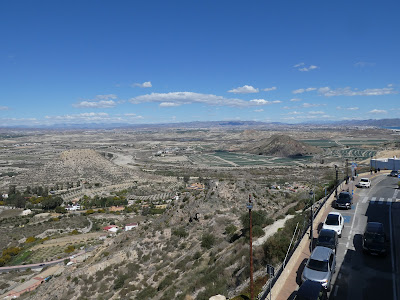 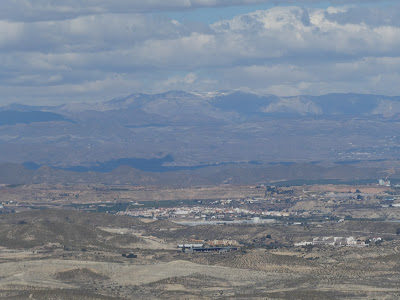 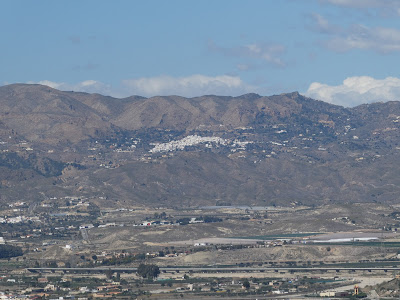 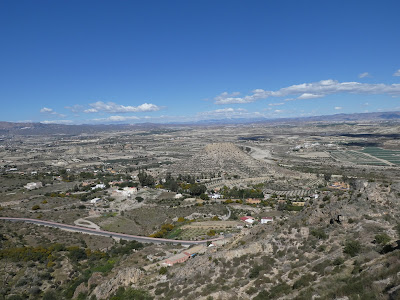 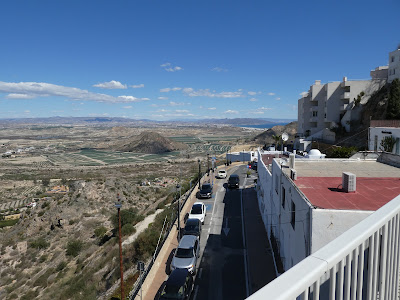 This one was taken on panoramic.

We walked round and round and up and down - if you have been to the Pueblo you will know what I mean! 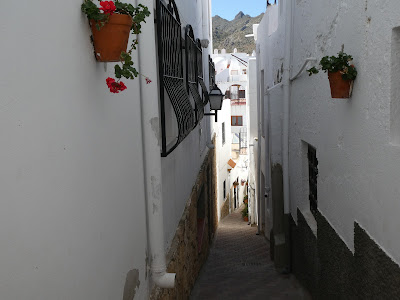 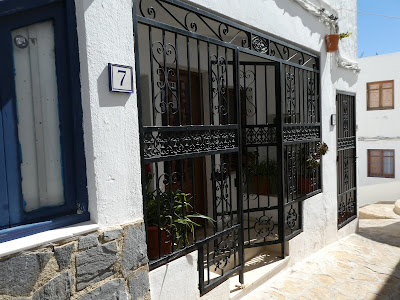 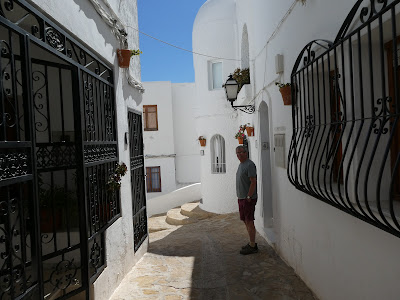 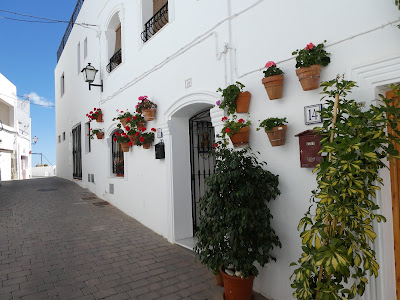 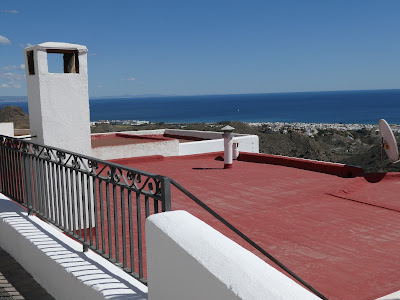 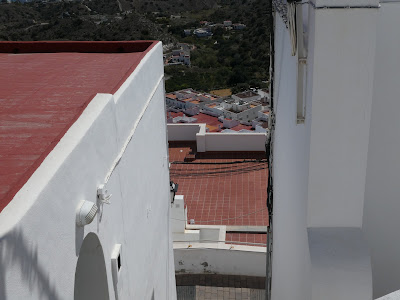 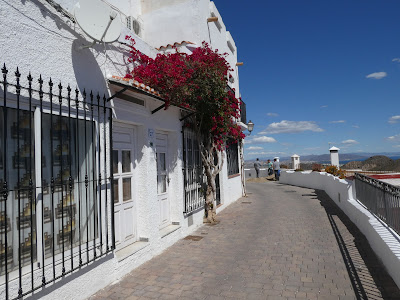 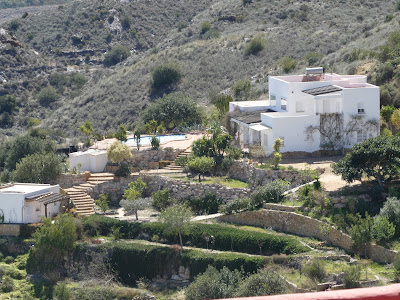 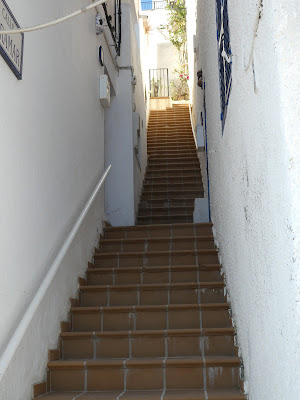 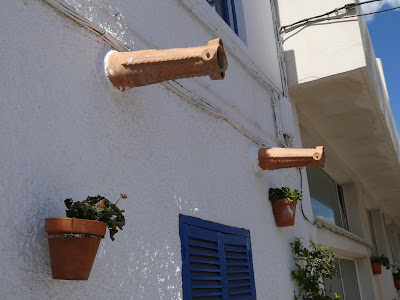 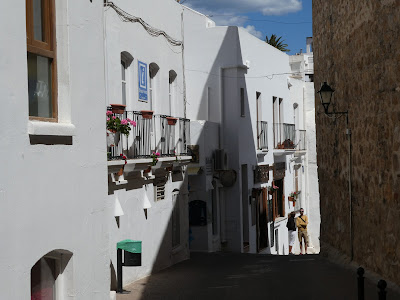 We found ourselves back in the square so stopped for a drink and, as we felt a bit peckish, we shared a pizza. 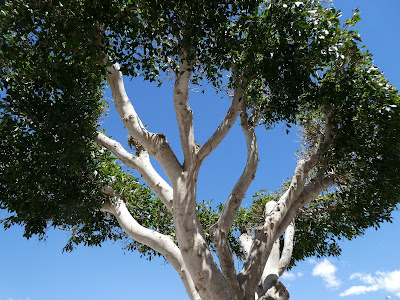 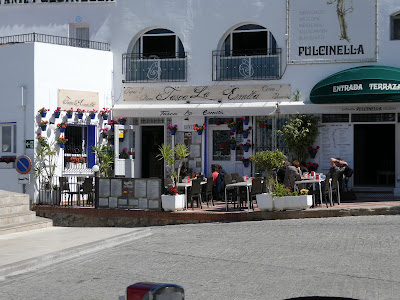 It was then back to the apartment where I realised that I had left my shopping from the gift shop in the cafe.  We shot back down there and it had been handed in - how grateful was I to that person.

There was the packing to do - we had to leave at 7.15am the next day so it had to be done.  It didn't take long so there was time for a rest before going across the road to Casa Juan where we met up with Sue & Andy and Roly & Bev for a farewell drink.  It was sad but we will see them again next year unless we see them on the canals somewhere this summer.  Our last dinner was at El Gaucho, which is just up the road from the apartment.  We had a lovely steak in there last year and we weren't disappointed this year either. 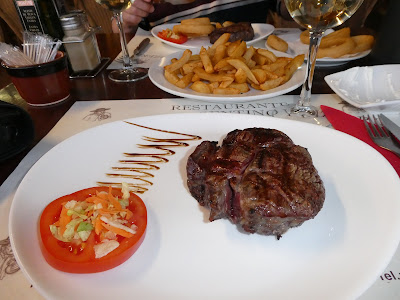 We were up at 6.15am on our last morning and away from the apartment by 7.20am (yes 5 minutes late!!)  However we did get to see the beginning of the sunrise which was gorgeous. 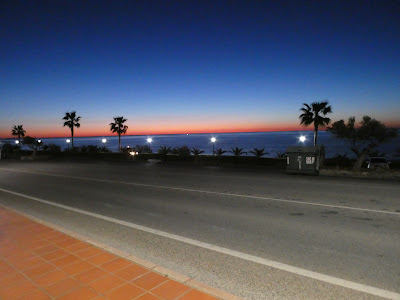 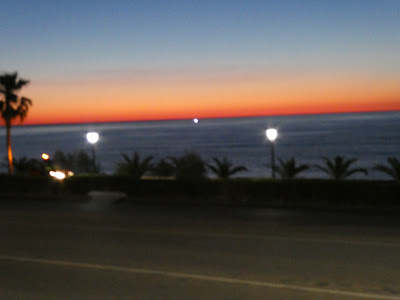 It's just under an hour to get to the airport but sadly the sunrise was behind us but we could see how it had turned the mountains red.  We dropped off our hire car and checked our bags in.  We just had time for a coffee before we were called to the gate.  The plane arrived early and as soon as the passengers were off then we were called to get on. 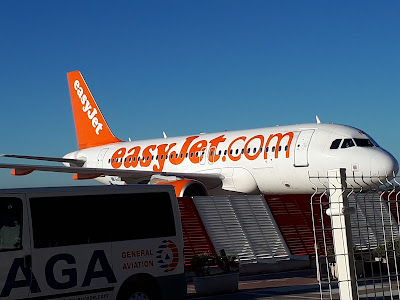 It was a good flight home and we arrived about 20 minutes early.  We picked up the car and drove home through grey skies and drizzle.  Those grey skies have hardly left us since returning.  Roll on Mojacar 2019!!

Posted by Linda Gifford-Hull at 19:00