Today was messed up with Muffin having to go to the vet in Paimpol to get the all clear to travel home.  I was very brave and rang the surgery and spoke to a girl who managed about the same amount of English as I did French!  In the end I said I would go at deux heures and just hoped that I had remembered that correctly and that they would be expecting us at 2pm!

We got into Paimpol about midday - just in time for lunch as Richard wanted to have 12 oysters this time!!!  We found a nice restaurant and sat out in the sun.  His oysters looked - well like oysters but my calzone looked better! 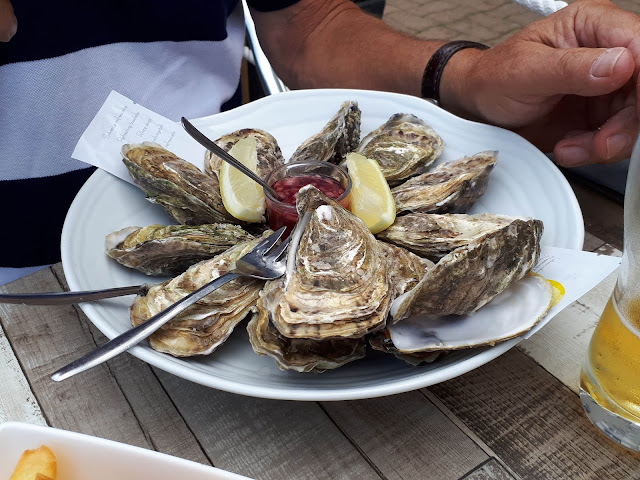 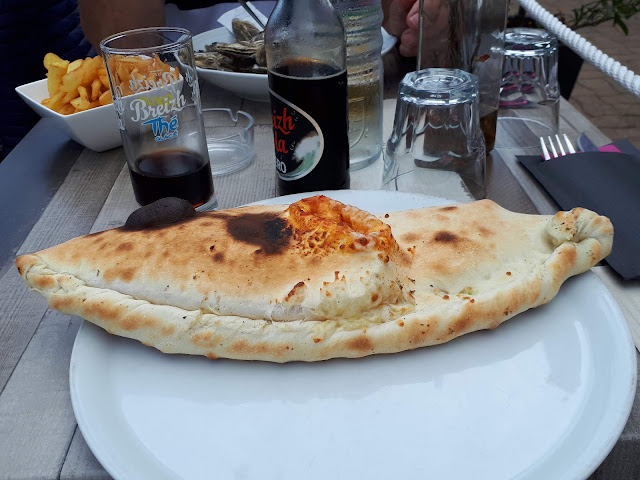 After lunch we wandered around the town and found it to be a really lovely old place.  It was so quiet though but I guess it was about 1pm on a Monday!  I wish I had taken more photos. 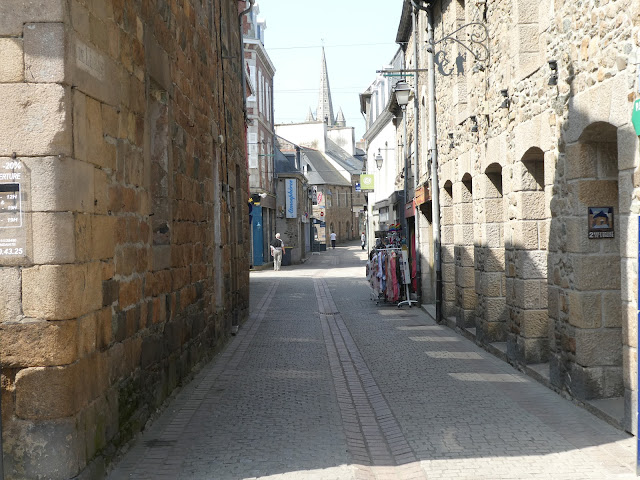 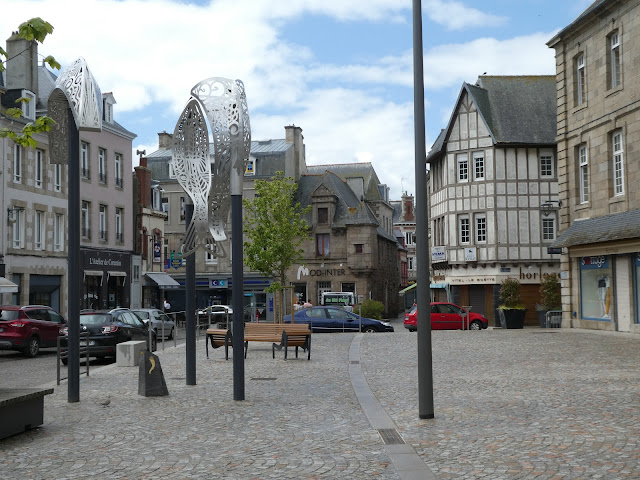 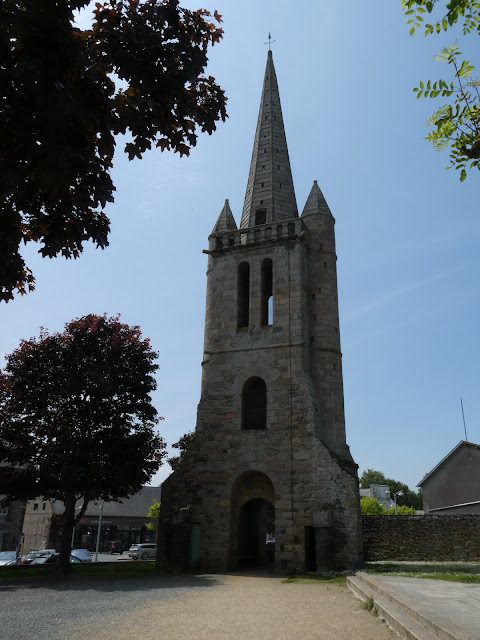 We were on the vet's doorstep at 2pm - it was then I discovered that there was no appointment system and that is what the receptionist had been trying to tell me.  Fortunately there was only a cat in front of us so we didn't have to wait long. All the vet did was look in Muffin's ears and mouth, fill in his part of the Pet Passport, give us a worming tablet (which he was supposed to administer) and charge us 30 Euros!  Money for old rope!!

From Paimpol we headed south to Binic.  Penny's book said nice things about it so we thought it was worth a visit and yes, it was nice.  I took thus from the Brittany Tourism website.  "Once a little medieval village, Binic grew to become one of the most important ports in the French fishing industry. It was the expeditions of the ‘terre-neuvas’  - the fishermen that left France to fish in Newfoundland  waters – that secured Binic its place in history, and the imposing granite and schist ship-owners’ houses lining the Quai Jean Bart are testament to this prosperous business. The town became a sailing resort as well as a charming seaside destination during the 20th century, and to this day boats shelter behind the 350 metre long main jetty referred to by locals as the ‘grande muraille’ (big stone wall)."  What is schist?  Wikipedia says "Schist is a medium-grade metamorphic rock with medium to large, flat, sheet-like grains in a preferred orientation (nearby grains are roughly parallel). It is defined by having more than 50% platy and elongated minerals, often finely interleaved with quartz and feldspar."  There you are then!!

We walked down passed the harbour and onto the "big stone wall" and sat there watching the tide coming in.  The rise in the tide today was about 7 metres so it came in pretty quickly. 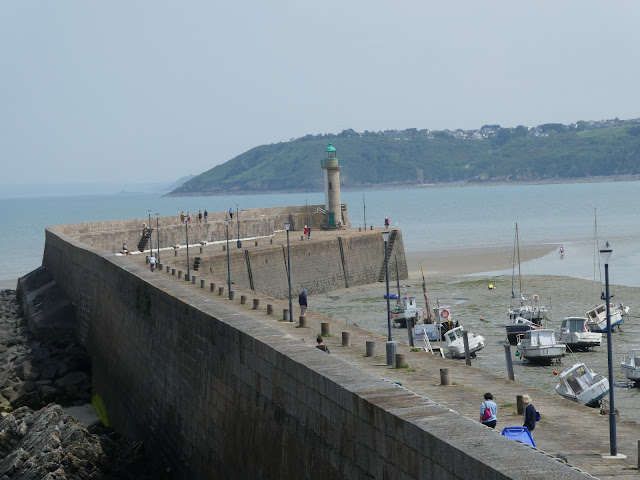 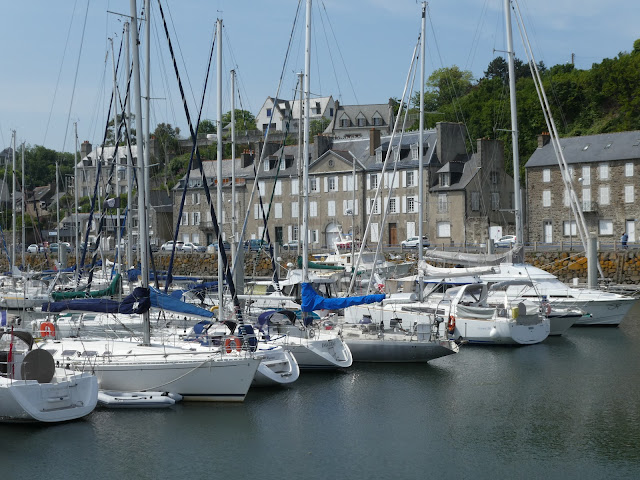 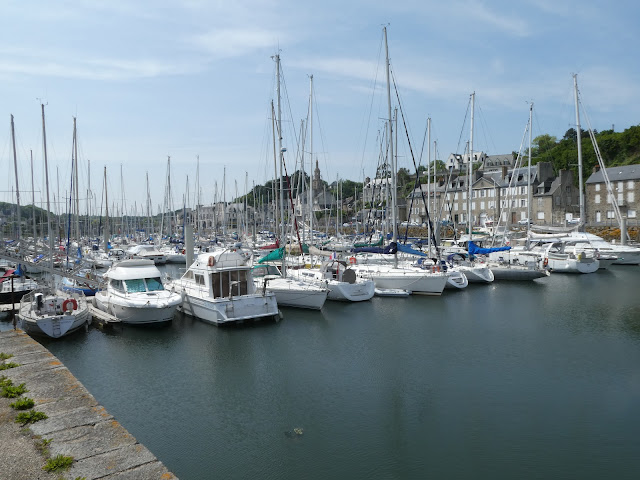 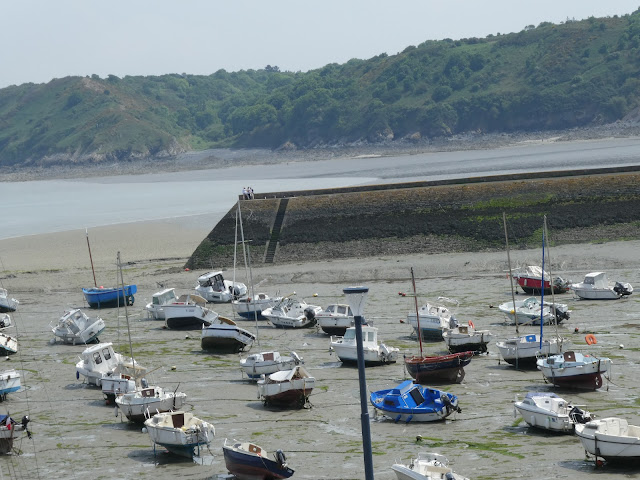 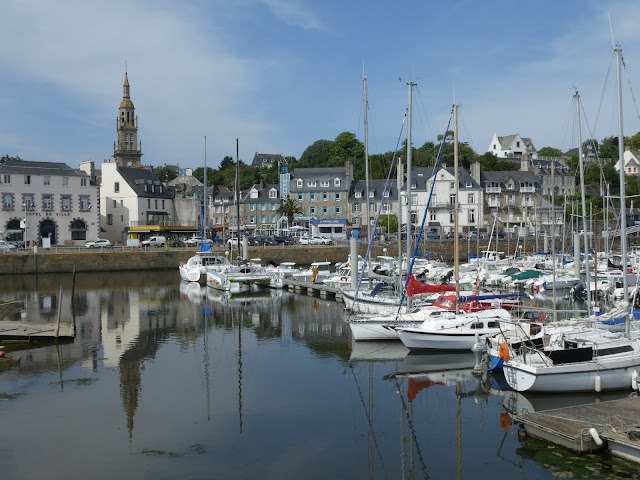 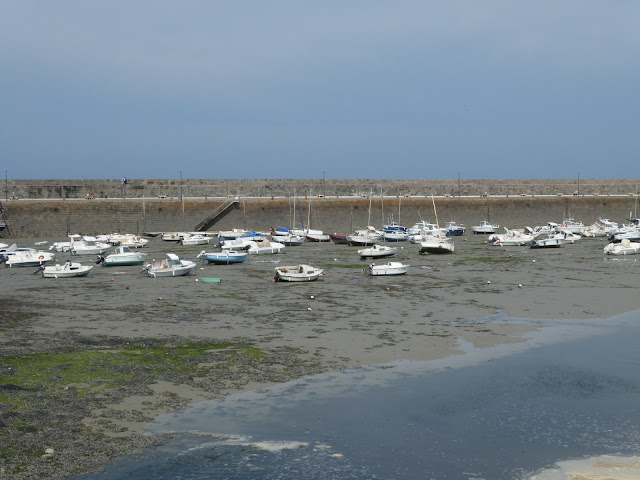 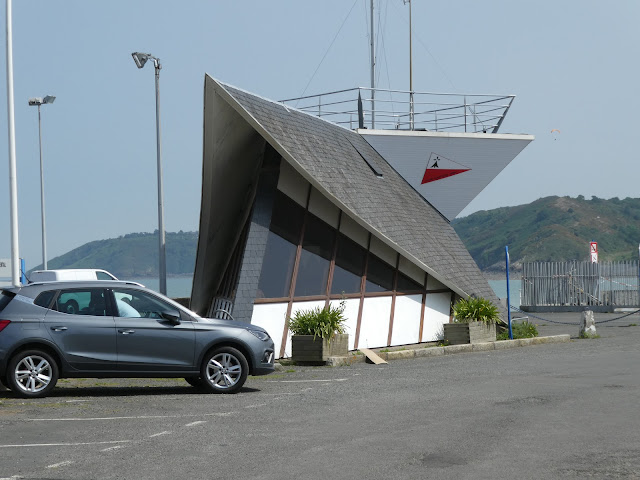 We then walked over the lock gate and round the other side of the harbour.  One of things that we noticed was that at least 95% of the boats in all the harbours we have been to have been yachts - motor cruisers don't seem at all popular in this area.

Later in the evening, back at the caravan site, we wandered down to the bottom row of static caravans to see what sort of view they had. 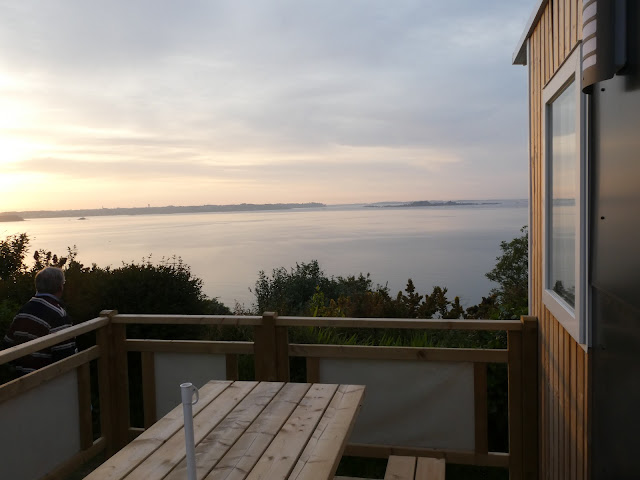 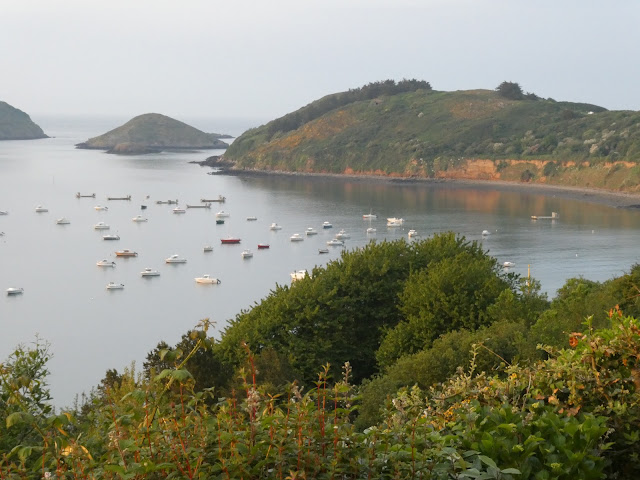 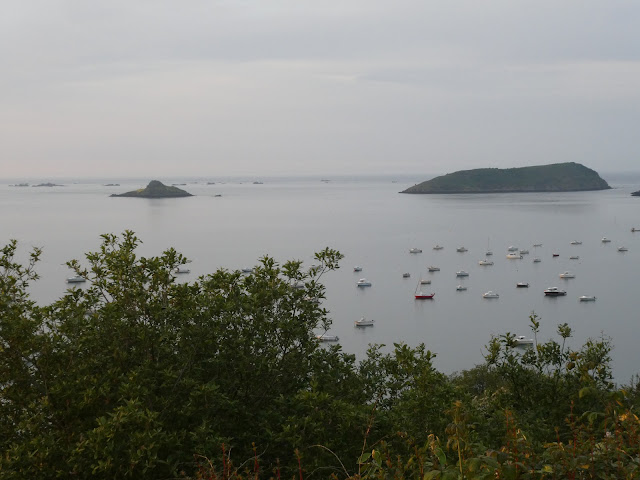 On our way back to the caravan we came across a chap playing a banjo!  We had heard him earlier and Richard was convinced it was recorded!  He was playing traditional Irish folk music.  We stopped and chatted with him and his wife.  He was from Belfast and she was from Nottingham - I have to admit that we both struggled to understand him as his accent was so broad.

Later on in the evening there was a wonderful sunset - we really counted ourselves us lucky to be able to see it from our caravan windows. 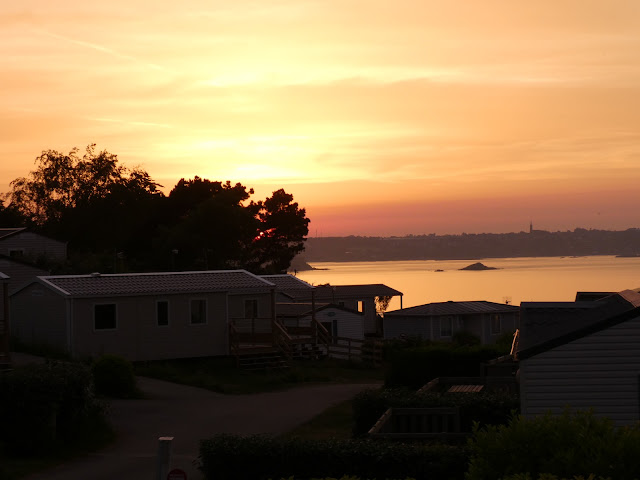 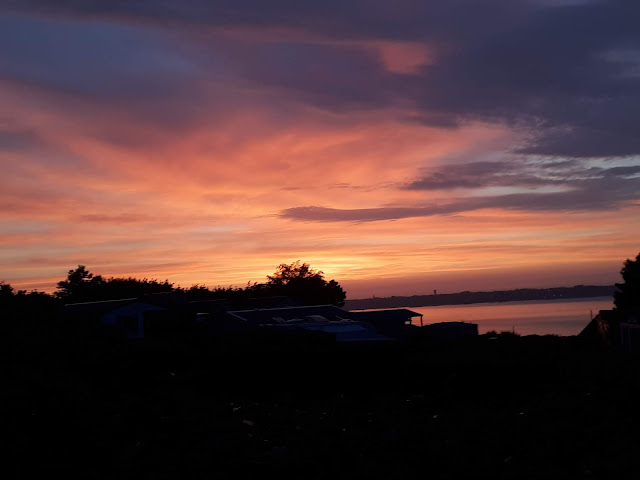 Posted by Linda Gifford-Hull at 14:47