The day started off hot and sunny but with a nice breeze but before we got to Napton Junction the cloud had come over and we finally got some respite from the heat.

Richard always ask me to go to the bow when we approach junctions but for some reason today he didn’t and of course we met a boat coming through the bridge.  There was a squealing of brakes (well engines in reverse) and the other boat came through.

At the first Calcutt Locks there were two boats coming up and a couple of boats waiting behind us to go down – just our luck they were travelling together so we were on our own but it wasn’t a problem as there were more boats coming up – easy peasy! 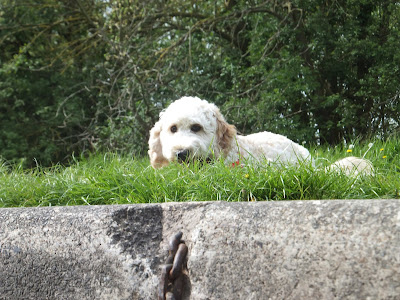 Nelson’s Wharf, home to Willow Wren, is now finished and looks great.  Since acquiring the land in 2013 Nelson’s Wharf have been busy clearing invasive scrub, repairing the canal bank to moor the Willow Wren Training narrowboats and building an environmentally friendly training centre. The 1870's canal arm was restored and finally opened in October 2017. In Spring 2018, they opened an accommodation building comprising admin office and two studio guest rooms.  The main leisure moorings are in the private canal arm leading off the main canal.  The wharf is part of a 40 acre estate which used to be the site of the Nelson's Cement Works and quarries which up until the late 1940's produced high quality cement and lime based products. It fell into dereliction until most of the site was demolished in the 1960's.  The canal was used to bring in coal to power steam engines and electricity generators and to transport finished goods from the site with their own fleet of steam powered motors and unpowered butties. Later, they also used the L&NWR railway which ran through the works and also had a fleet or lorries.  Although the remains of structures still exist in places the site has largely reverted to countryside and now also has a Site of Special Scientific Interest, (SSSI). The area is noted for rare butterflies, (such as the Small Blue), and many orchids.  (I’ve taken these photos from Nelson’s Wharf website) 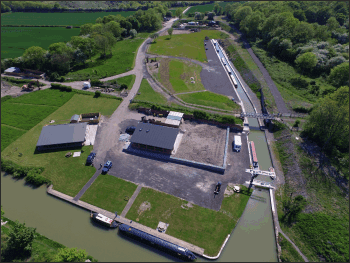 We pulled over for lunch and afterwards, as we were preparing to cast off, a boat went passed – oh goodie could this be a fellow boater to go down Stockton Locks with?  As we arrived at the top of the locks we realised our luck was in and what was more the crew were French students over here on holiday and to learn English.  They were coming to the end of a fortnight aboard and knew what they were doing - we completed the 8 locks of the flight plus the extra two in 65 minutes!  Richard was going on ahead to set the next lock while the young French girl and I moved the boats beside each other from one lock to the other – she was an excellent helmsperson.  We only passed one boat coming up.  We have, hopefully, booked to do the Hatton flight with Triumvirate on Thursday afternoon.

We had thought we might stop at the Blue Lias tonight but decided to continue down the locks as we had help.  Triumvirate stopped at the bottom of the locks while we continued on to where we had stopped last year.  Hopefully it will be the Cape of Good Hope for dinner tomorrow.

Posted by Linda Gifford-Hull at 09:20