A cloudy morning but that’s fine by me – we had the 11 locks of the Wilmcote flight to do.

We passed through Wilmcote where Mary Arden’s house is – but is it??  Because of confusion about the actual house inhabited by Mary in the mid-sixteenth century, the term may refer either of two houses both of which are grade I listed.  A house wrongly identified as Mary Arden's (it actually belonged to a neighbour) was bought by the Shakespeare Birthplace Trust in 1930 and refurnished in the Tudor style.  In 2000 it was discovered that the building preserved as Mary Arden's house had belonged to a friend and neighbour Adam Palmer and the house was renamed Palmer's Farm. The house that had belonged to the Arden family is Glebe Farm, near to Palmer's Farm. A more modest building, it had been acquired by the Shakespeare Birthplace Trust in 1968 for preservation as part of a farmyard without knowing its true provenance. The building has lost some of its original timber framing and features some Victorian brickwork, but it has been possible to date it through dendrochronology to c.1514 (this information comes from Wikipedia and I had to look up what dendrochronology meant!  It is the science or technique of dating events, environmental change, and archaeological artefacts by using the characteristic patterns of annual growth rings in timber and tree trunks – so now you know!!) 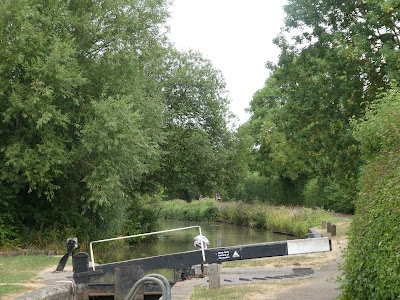 We arrived at Wilmcote top lock to find another boat in front of us – just our luck!  However, the lock worker had a bike and was cycling between two locks to prepare the next one.  As he left the lock his boat was in he lifted a paddle to help us out 😊  We came across a stag party boat – 10 young men all extremely nice and chatty.  They had got stuck in a lock in Stratford last night.  Something was behind the gate and they couldn’t open it – that was at 6pm.  They finally got out at 12.30am!!  I did feel sorry for them but they said that they had had a good time.  I asked which one of them was the groom and they pointed at one chap flat out on the roof – he had obviously had a good time.  I did ask him if he was alive and I got a thumbs up from him!  Good to see that he had a bottle of water as well as his lager can! 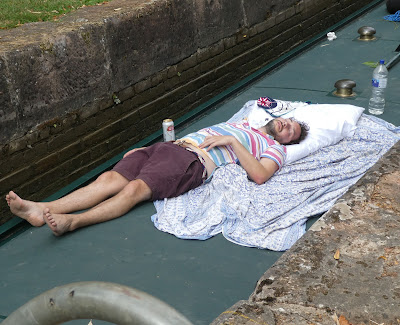 There was a lockie on the middle five locks of the flight and we seemed to whizz through there. 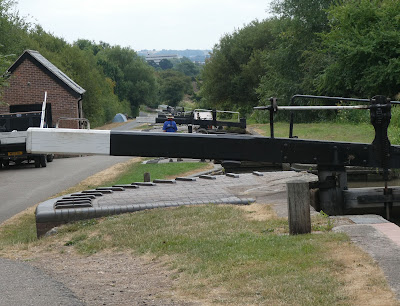 That just left the last three and they didn’t take long.  We had decided not to go into Stratford today with it being a sunny, summer Sunday.  We will leave that until tomorrow.  We moored up at the bottom of the flight where, sadly, there are no trees, so we had rather a hot afternoon.

During the afternoon we had a visitor – Percy the homing pigeon!  He landed on the gunnel and sat there, Richard wondered if he was thirsty and offered him water from Muffin’s water bowl (clean of course!) and he drank readily.  We thought he had gone but when I came down below he was sitting on the side hatch.  He was obviously a well loved pigeon as he didn’t try to fly away as I passed him – in fact he turned towards me.  I’m not sure when he flew away but he did! 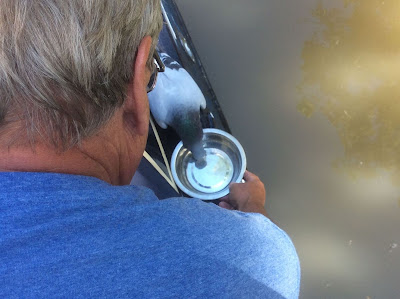 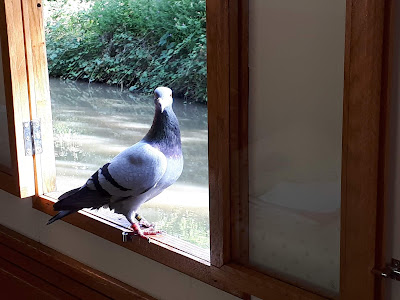