I had an awful night’s sleep.  The boat was so hot, and we went to bed with all the windows, doors and side hatch open.  Richard went straight to sleep but I couldn’t so got up and moved into the saloon.  I put the two captain’s chairs together and lay out there, but I was still too hot.  I must have finally dropped off as I woke up to a hairy chin on my leg – no Richard hasn’t grown a beard it was Muffin!!  It was 2am and I had cooled down so went back to bed and didn’t wake up until 8am. 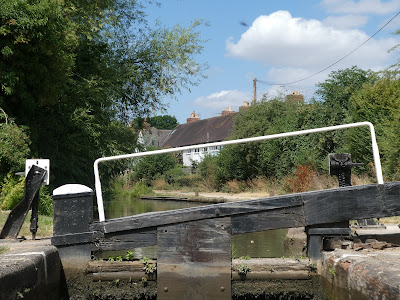 The six locks down into Stratford aren’t the easiest.  We stopped at Avon Boating for diesel and to empty the elsan cassettes.  At one of the locks were two C&RT men who, we found out later, were digging silt out from the bottom gates, I couldn’t believe my eyes when the lady from the boat coming up was really struggling with opening one of the top paddles, they just looked at her and then her partner got off the boat to hold the centre line – in a narrow lock!! I did feel sorry for her.  We kept asking people if there was room in Bancroft Basin but when we got there we found only two spaces!  It was very hot in the basin, so we decided to get our shopping and flee to the river.  We had planned to have baguettes from the baguette boat for lunch, but it was all shut up and fences round it ☹ so it was Ryvita and cheese onboard.  We did our shopping, had an ice-cream and prepared to leave the basin.  There was a boat coming up the lock from the river, so we slipped in as they came out and the trip boat was waiting to come up so one of their crew helped us down.  We were amazed to see only a handful of boats moored on the river so we had our pick of the places.  In the end we went quite a way down and moored under one of Stratford’s lovely weeping willow trees with a very high tree opposite which shaded us as the sun went down. 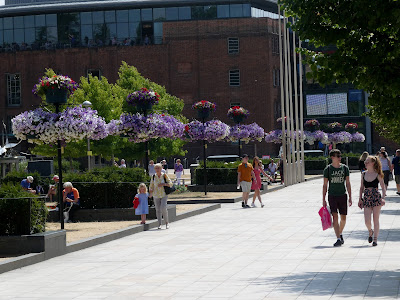 We had a lovely afternoon chilling under our weeping willow – there was a lovely breeze which was very welcome. 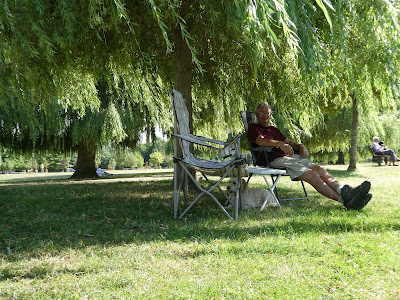 I had asked at the ice-cream boat about the baguette barge and the lady had told me that it is for sale.  I found this information in the Caterer magazine.  “The business was founded in 1995 on a 30ft narrowboat and acquired in 2001 by Colin Pike and Karen Tobin, who transformed it from a small seasonal venture into one of the town’s busiest small businesses. In 2003, they expanded into the current 60-foot long and 10-foot wide barge. The freehold is on the market for offers in the region of £350,000.” If anyone is interested in buying it you need to contact Tim Fox Associates.

Posted by Linda Gifford-Hull at 12:08